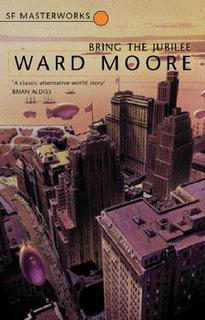 Better as a short story?

As soon as Hodge Backmacker -- the auto-didact peasant turned pedagogue with a penchant for the history of the American civil war - encounters Barbara Haggerswell -- an iconoclastic physicist and time-machine inventor -- sheltering at the academicist commune of Haggershaven, it is self-evident how the pay-off of to this alternate history novel is going
to be delivered. Despite the fact that this entry in the series is less than 200 pages in length, getting to the stunning final quarter of the book proves something of a slog.

The first quarter of the book is a compressed bildungsroman, detailing Hodge's progress from aspirational hick to man of letters. The middle contains a good deal of redundant exposition regarding Hodge's relationship with Barbara Haggerswell and his salvation of and subsequent marriage to Carrolita, rescued as an adolescent from the scene of a roadside robbery of a member of the Spanish aristocracy and his wife. The final four chapters, in which Hodge ventures back into the past to ratify his theories about the battle of Gettysburg with monumental consequences are quite magnificent, and I'd recommend Bring the Jubilee on this basis alone.

In addition, many appealing aspects of alternate history run through this entry in the SF Masterworks series: I enjoyed Moore's depiction of the impoverished and struggling 26 states which form the United States in this novel on the basis of the Confederacy having won the American civil war and prospering at the expense of the north. You too may enjoy the ur-steampunk minibles and air balloons of a familiar yet strange turn-of-the-twentieth-century New York.
Tweet

I loved every part of this book, there was no superfluous parts of this story in my opinion. This book single handedly invigorated my interest in the alternate histories sub genre of SF.

Hey! Thanks for stopping by and taking the time to leave a comment. This was the first review I wrote of the SF&FMW series, and through the mists of time (I need to read and write quicker if I am to finish this before I go belly up ;)) I'd say it was this book that prompted me to begin this hare-brained project in the first place. So it has an etiological significance for both of us