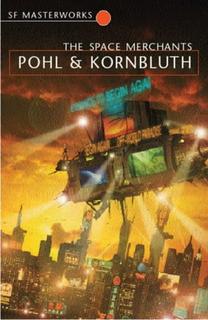 A trenchant critique of the suffocating consumerism of 1950s America

The Space Merchants protagonist, Mitchell Courtenay, is a high-ranking 'copysmith' with Fowler Shocken Associates, rival of Taunton Associates, a brace of marketing machines which suffuse the 22nd century within which the narrative is set with all-pervasive adverts which suffocate the senses. A global underground resistance movement, the World Conservationist Association, or 'Consies', attempts to undermine their domination. The W.C.A. 'believes that reckless exploitation of natural resources has created needless poverty and needless human misery' which will 'mean the end of human life on Earth' if it continues unchecked. It believes the inexorable decline of humanity can only be reversed 'if the people of the Earth can be educated to the point where they will demand... reforestation, soil-building, deurbanisation, and an end to the wasteful production of gadgets and proprietary foods for which there is no natural demand' (pp. 86-7). In the interim, the race to market the colonisation of Venus is on.

The plot twists interestingly in the middle of the book, where Courtenay's identity is switched and his death faked by what he assumes to be a rival, with an accompanying fall from economic grace. He is recruited by the W.C.A., and rapidly works his way to the top of the organisation with the intention of rising to a point where he may gain access to his former associates and re-establish himself. Courtenay, however, experiences a Pauline conversion to the cause and the work concludes with an ending redolent of Casablanca.

Interesting as this entry in the SF Masterworks series is as a whole, it is Courtenay's ideological transformations that will grip the 21st century reader. The authors convincingly portray the development of the protagonist from a high priest of consumerism to a clear-sighted critic of the same who learns to 'despise everything for which [he] stood' (p. 155). The former pities the 'sterile zealot' who rejects capitalism and could have 'played his part in the world, buying and using and making work and profits for his brothers all around the globe, ever increasing his wants and needs, ever increasing everybody's work and profits in the circle of consumption, raising children to be consumers in turn' (p. 89). The latter reaches the ineffable conclusion that 'the interests of producers and consumers are not identical... most of the world is unhappy... workmen don't automatically find the job they do best... entrepreneurs don't play a hard, fair game by the rules' (p. 147).

A short work at 186 pp., but one which makes its point economically (no pun intended). Evolution isn't over.
Tweet