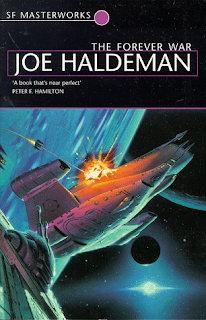 It is 1997. Subsequent to the destruction of a colonists' ship near Aldebaran in the constellation of Taurus, the world is at war with the Taurans.

Warfare is space is deemed to be too complicated for the traditional jarhead, and the first draft of infantry enlisted by the Elite Conscription Act of 1996 consists of 'fifty men and women, with IQs over 150 and bodies of unusual health and strength' (p. 9). One of them is Private William Mandella.

The work forecefully demonstrates how conflict strips humanity of all the facets of existence which give life meaning and value, leaving an empty husk:

Haldeman's own experiences in Vietnam season this taut narrative with arresting, sometimes shocking, descriptions of the grimly visceral and unremittingly futile nature of warfare. 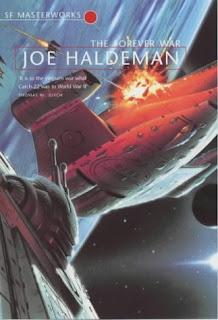 The text features some interesting pseudo-hard science devices. This is a universe in which 'collapsar Stargates' have been discovered, which facilitate the bending of relativity at the expense of time dilation. With the many stargate jumps that Mandella completes to reach the conflicts his unit participates in, he finds that the Earth that he left has changed beyond recognition on his return during his 1,100 year career. We as readers share Mandella's 'future shock' (p. 99) as he returns to a world of nine billion inhabitants run by the UN, two thirds of whom are unemployed, blighted by plagues and disasters, with an 'undeclared class war going on all over the world' (p. 111-113).

Furthermore, 'the most important fact about the war to most people was that if it ended suddenly, Earth's economy would collapse' (p. 131) as 'nearly half the jobs in the world were associated with the war, and if it stopped, everything would fall apart' (p. 143). The protagonist endures further jolts as he returns from future missions to discover that humanity has become first societally homosexual, then heterosexual again - but cloned. 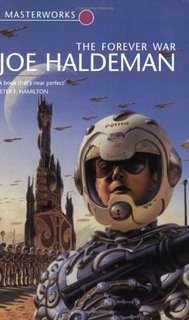 Whilst SF as a genre continues to spawn series of lazy works which still deem it necessary to dedicate entire volumes to their protagonists' infinitely tedious careers, The Forever War unfolds the story of Mandella's unwilling and hapless progress through the ranks, and his poignant relationship with fellow conscript Marygay Potter, in a mere 250 pages. Mandela and Potter's careers run in parallel for the first two-thirds of the work, but when they are both promoted to a senior officer's rank and assigned to different units, they realise that 'in different ships, the geometry of the collapsar jump would pile up years between [them]. When the second one arrived on Earth, his partner would probably be a half-century older; more probably dead' (p. 168).

The Forever War has endured a convoluted history as an entry in the SF Masterworks series, having enjoyed four different imprints to date. Originally published in paperback as the series' inaugural entry in January 1999 with the title and author's name printed against a black background (first image), The Forever War was reissued a hardcover in 2001 (second image). An excerpt from the same Chris Moore artwork also provided the cover image for this edition, this time being blown up to provide a full-page illustration. As an aside: this release was one of ten titles published as part of a short-lived accompanying series of SF Masterworks to which Orion held the hardcover, but not the paperback rights. Of the ten titles, only The Forever War and The Stars My Destination had also been published in paperback, although of the remaining eight, Ringworld has subsequently received a paperback release, presumably subsequent to the rights having been reclaimed (or perhaps, knowing Orion, rediscovered). The paperback was reissued in 2003 with a new cover (third image above), and most recently in 2010 using the same image in the latest unnumbered design format.
Tweet

I interviewed Joe Haldeman recently and asked him about The Forever War and winning the Grand Master award. He told me, with his usual wry sense of humor, that he doesn’t feel old enough. (If you're interested, you can read my Joe Haldeman interview for free at SciFiBookshelf.com )

Thanks for taking the time to leave a comment. Time seems to have dilated since I last posted to this blog. I'm working on it :)