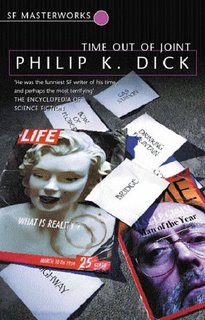 Ragle Gumm make a comfortable living by means of his mastery of a newspaper competition called 'Where Will The Little Green Man Be Next', and lives with his sister Margo and brother-in-law Vic. However, as elements of his existence cease to exist and resolve themselves into pieces of paper, so he begins to question whether the reality he finds himself in is indeed real. With a sense of unease, Gumm comes to believe that he is 'the man with the KICK ME sign pinned on him. No matter how hard he tries, he can't whirl around fast enough to see it. But his intuition tells him it's there' (p. 115).

Like Ragle Gumm, Philip K. Dick experienced a number of 'leaks in [his] reality' (p. 87). Much of the pleasurable labour of reading his works lies in attempting to discern where the leaks are getting in, and what they mean. Meaning in PKD's novels is prone to disintegrate under the influence (in several senses) of philtres and filters. Drink, drugs, psychoanalysis and a tangible paranoia which the author often proves to be entirely justified permeate his canon. Whilst Ragle Gumm passes on the carbon tetrachloride he is offered in Time Out Of Joint, and has more phantom memories of drinking warm beer on a pacific atoll than he actually consumes during the course of the novel, Gumm finally discovers that his 'lunacy' is not madness, but a consequence of his involvement on behalf of both sides in an interplanetary civil war.

PKD may be somewhat over-represented in the SF Masterworks series, but the influence Time Out Of Joint has had on the genre overall more than merits this particular title's inclusion. Jim Carrey vehicle The Truman Show was clearly heavily influenced by Time Out Of Joint, and Gumm's psychological conditioning has been borrowed by any number of SF novels and TV shows. The Federation's manipulation of Roj Blake, protagonist of cult 1970s British SF space opera Blake's 7 springs to mind, for one.

There is a level at which this text operates as metaphor for the alienation of contemporary life. Gumm's tantalising glimpses of another world and his desire to escape from a reality he believes to be an illusion are highly engaging. 'I know that I almost got away... I almost got over the edge and saw things the way they are. Not the way they've been arranged to look' (p. 154).