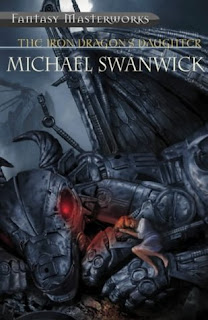 Jane Alderberry, a changeling child snatched from the Lower World by the dragon riders of the Upper World, has been put to work in an industrial complex that constructs dragons for military use. Under the influence of renegade decomissioned dragon 7332, Jane discovers and absorbs a flight manual grimoire, and acting as pilot facilitates their escape.

So far, so good. A mercurial changeling child buddying up with a misanthropic, missile-toting dragon in order to embark upon a destructive spree that will destroy the elven elite and liberate the Upper World for the panoply of fantastical races that inhabit it sounds like it would be a terrific read.

Unfortunately, that work has yet to be written.

Subsequent to their fleeing the steampunk-inflected dragon works, 7332 and Jane ensconce themselves in an outlying town and the changeling, somewhat unexpectedly, embarks upon an educational program in order to learn how to repair the damage that the dragon endured during their escape. After a falling out between the pair as a consequence of the dragon's selfish disinterest in Jane's needs, 7332 enlists the help of a lilliputian race, the Meryon, to service his requirements in return for providing them with an environment in which to live in the form of his own person, and disappears from the narrative.

With the titular dragon absent from the text for around two thirds of its duration, the reader is left with only the scant diversion that Jane can provide for their entertainment. I say this in a disparaging way not because the use of a child protagonist of necessity implies that a novel cannot engage the adult reader, which numerous historical precedents from Great Expectations to The Curious Incident of the Dog in the Night-Time, to The Adventures of Huckleberry Finn or Ender's Game prove to be not the case, but because the 'adventures' that befall Jane are so uniformly tedious. The middle section of The Iron Dragon's Daugter reads like a bad YA novel with lots of breathless, overblown teen-angst focusing on friendships, familial relationships, and moral experiment. The narrative slows to a crawl, and tedium reigns. It has been pointed out to me that it is not unreasonable to find that a book featuring a young adult protagonist should ape the YA genre's conventions, which is a perfectly valid observation. However, Swanwick seems to go out of his way to overthrow the genre expectations that such a setting would lead the reader to anticipate by shoveling an hilariously excessive amount of swearing, drug use, graphic sex and sadistic violence on to the text for no apparent reason other than the fact that it amuses him. It didn't amuse me so much. The ostensible reason for Jane's promiscuity is her discovery that her experiments don't work as she studies for her degree in alchemy as a consequence of the fact that their success actually depends upon her mastery of sex magick. This has a role to play within the text, but the shag-athon she embarks upon towards the end of the work in order to collect names as 'fuel' for the dragon's assault upon Spiral Castle, a.k.a 'heaven' is nothing short of the author's taking a perverse pleasure in debasing one of his characters. I found this odd.

Upon 7332 re-entering the narrative, Jane, who has been using her magical training in order to try to reconnect with her mother in the Lower World (yes, this 42nd entry in the Fantasy Masterworks series really is that corny), overcome with grief at the repeated deaths of Puck/Peter/Rooster/Rocket, her 'Eternal Champion'-esque lover, finally succumbs to the dragon's insistence that she has no free will and is merely a pawn in a bigger game (see. pp. 245, 273), and embarks upon no less ambitious a project than the destruction of creation in its entirety.

Isolated elements of the text diverted me: I enjoyed the description of the grimoire; most of the sections focusing on the dragon Melanchthon; the author's playful use of the tropes of paganism; the gargoyle and mechanical ex-military horse and, on occasion, Swanwick's writing, as well as his ability to drop genuinely surprising events into the work in order to 'demonstrate' the mechanics of magic in his world. I have to confess, however, that overall I found this work a real drag, and had to read several other books in between this one as a reward to myself for persevering with it. Perhaps the author conceives of himself as having written a provoctive work of postmodern fantasy, knowing, self-referential and ironic in turns, toying with the reader's generic expectations and challenging their sensibilities. Well, he can think that if he wants. Perhaps he thinks nothing of it at all. Personally, I think very little of it.
Tweet

Huh, I don't get this review...you bash the novel, yet it is headed under a "Masterworks" moniker of your blog.

Thanks for taking the time to leave a comment.

The blog title refers to the two series titles I am reviewing: SF Masterworks and Fantasy Masterworks.

Some live up their monicker; some don't (IMO).

Did you enjoy The Iron Dragon's Daughter?