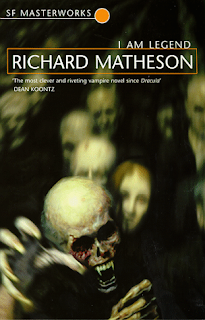 ‘Vampires were passé, Summer’s idylls or Stoker’s melodramatics or a brief inclusion in the Britannica or grist for the pulp writer’s mill or new material for the B-film factories. A tenuous legend passed from century to century. Well, it was true[…] And before science had caught up with the legend, the legend had swallowed science and everything.’ (p.23)

1976. Robert Neville, ‘a tall man, thirty-six, born of English-German stock, his features undistinguished apart from the long, determined mouth and the bright blue of his eyes’ (p. 8) is immune to infection from the bacteria responsible for a pandemic of apparent vampirism subsequent to a chance inoculation from a bat years earlier whilst fighting abroad.

In his fortified house, Neville shakes off bouts of depression and dypsomania in order to research the pathology of the infection, and makes some progress. He concludes that ‘the freed spores [are] blown about by[…] storms. They could lodge in minute skin abrasions caused by the scaling dust. Once in the skin, the spore could germinate and multiply by fission. As this multiplication progressed, the surrounding tissues would be destroyed, the channels plugged with bacilli. Destruction of tissue cells and bacilli would liberate poisonous, decomposed bodies into surrounding healthy tissues. Eventually the poisons would reach the blood stream. Process complete. And all without blood-eyed vampires hovering over heroines’ beds. All without bats fluttering against estate windows, all without the supernatural. The vampire was real. It was only that his true story had never been told’ (p. 81)

I Am Legend is a four-section novel covering a three year period spanning the protagonist’s attempts to survive between January 1976 to June 1979. It is a simple, fast-paced tale economically told, and Matheson is adept at generating a page-turning frenzy in his reader. For example, aware of the fact that Neville must be ensconced in his fortress before nightfall if he is to be safe from the infected, our adrenal glands are given a good squeeze when, with the protagonist far from home, we read: ‘he jerked up the watch and held it against his ear, his heart suddenly jumping. The watch had stopped’ (p. 35).

But this is not all that the fine entry in the SF Masterworks series is. It also has a good deal to say about racial tensions in 1950s America, and the tedium of post-war life in North America.

Matheson’s protagonist is a misogynistic psychotic. The suppression of sexual desire and violence against women are conjoined in the person of Robert Neville: ‘all the words of centuries couldn’t end the wordless, mindless cravings of his flesh’ (p. 13); ‘Why do you always experiment on women? He didn’t care to admit that the inference had any validity’ (p. 54); ‘The hand lashed out again, this time smashing her across the cheek and snapping her head to the side’ (p. 55) (N.B. the decontextualizing reference to ‘the hand’ rather than ‘his hand’); ‘Morality[…] had fallen with society. He was his own ethic’ (p. 54); ‘With a snarl of rage he drove his right palm across her face. She staggered back, then looked at him dizzily. Abruptly she started crying helplessly. She sank to her knees before him, holding her arms over her head as if to ward off further blows[…] “Get up,” he said. “I’m not going to hurt you”’ (p. 115); ‘Shall I kill her now? Shall I not even investigate, but kill her and burn her?’ (p. 130).

Furthermore, in ‘a world in which murder was easier than hope’ (p. 130), Neville is methodically homicidal: ‘After lunch, he went from house to house and used up all his stakes. He had forty-seven stakes’ (p. 22); ‘his face twisted into an expression of raw, unqualified hatred. Bastards! I’ll kill every mother’s son of you before I’ll give in!’ (p. 24); ‘It was better not to know anything about the people you killed’ (p. 118).

There is little about the stultifying nature of contemporary life projected into the mid-1970s that the author seems to suggest is worth saving. Of his former colleague Ben Cortman, now infected, Neville concludes ‘he thought Cortman[…] happier now than he ever had been before’ (p. 110); ‘Ben Cortman was born to be dead. Undead, that is, he thought, a wry smile playing on his full lips’ (p. 111). ‘There was only the present for Robert Neville; a present based on day-to-day survival marked by neither heights of joy nor depths of despair. I am predominantly vegetable, he often thought to himself. That was the way he wanted it’ (p. 111).

At the heart of the book is a fixation with and a resistance to societal change, which in view of the historic events taking place in the year of and immediately after the publication of this work, it is difficult not to interpret within the contexts of ethnicity, with the African-American as ‘vampire’. Published in the year of the Brown v. Board of Education ruling, and less than twelve months before the Montgomery Bus Boycott would propel the movement into the public eye, there is a strong Freudian reading of I Am Legend as an hysterical predictor of, as the text seems intent on inferring, destructuve outcome of the nascent African-American civil rights movement.

Neville has a drunken debate with himself over the status of the vampire: ‘I will sketch out the basis for my thesis, which thesis is this: Vampires are prejudiced against. The keynote of minority prejudice is this: they are loathed because they are feared’ (p. 26); ‘It was no use; they’d beaten him, the black bastards had beaten him’ (p. 30); ‘Do you want to be changed into a black unholy animal?’ (p. 106). As the work repeatedly refers elsewhere to the complexion and appearance of the infected as being 'pale', the unexpected use of the referents of darkness (ostensibly moral, but also by extension physical) is loaded with extra-textual significance.

Revisiting Neville’s attitude towards women, from a Freudian perspective the suppression of sexual desire that figures so strongly in I Am Legend becomes a fear of the reproductive outcome of the sexual act, with specific reference to the fear of the propagation of ‘blackness', of the African American. Neville’s depersonalized, righteous violence, archetypal of the ‘zombie’ genre and developed in this novel, is disturbing enough in itself, but rather more than alarming when reconsidered in this racially-charged context.

The work’s conclusion foregrounds that in the same way as ‘bacteria can mutate’ (p. 147), so social arrangements evolve. The dead, reanimated by the bacteria (symbolic of those stultified into inaction by contemporary life) are executed by the living (those who have learned how to control the disease) of the new social orders (‘like a revolutionary group – repossessing society by violence. It’s inevitable.’ (p. 157)) leaving Neville to reflect on the fact that ‘he felt more deeply towards the vampires than he did toward their executioners’ (p. 149)

Neville’s desire to retreat from the world into isolation combined with an hysterical terror at his loss of identity and individuality (with the inference that a variety of this imagined future was a scant twenty years away from 1954) is a clarion call for racial purity: ‘Then he stood in the dark kitchen, eyes tightly shut, teeth clenched, hands clamped over his ears. Leave me alone, leave me alone, leave me alone!’ (p. 14); ‘There was, of course, the faint possibility that others like him existed somewhere, trying to go on, hoping that someday they would be among their own kind again’ (p. 24); ‘a weird Robinson Crusoe, imprisoned on an island of night, surrounded by oceans of death’ (p. 77).

The text postulates that the hegemony of the Caucasian male is over, and that a new people’s time has arrived as Neville ‘looked out over the new people of the earth. He knew he did not belong to them; he knew that, like the vampires, he was anathema and black terror to be destroyed. And, abruptly, the concept came, amusing to him even in his pain[…] I am legend’ (p. 160).

The protagonist is indeed a legend. Not in the sense of a ‘romantic myth’ but rather from the Latin legenda: a symbolic explanation.

‘How quickly one accepts the incredible if only one sees it enough!’ (p. 58)
Tweet