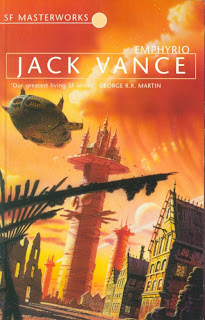 "But why have you performed such evil, on folk who have done you no harm? Why? Why? Why?"

"'Why?'" Ghyl cried out. "To achieve! To make capital of my life, to stamp my imprint upon the cosmos! Is it right that I should be born, live and die with no more effect than a blade of grass[...]"

Fanton gave a bitter laugh. "Are you better than I? I live and die with equal inconsequence. Who will remember either of us?"

Ghyl Tarvoke carves decorative wooden panels in his father Amiante's workshop in the city of Ambroy on the planet Halma. The finished artifacts are sold to the wood-carvers' guild in return for coupons which are redeemed for goods and services. Outside of this system of distribution and exchange are the noncuperatives or 'noncups,' 'nonrecipients of welfare benefits, reputedly all Chaoticists, anarchists, thieves, swindlers, whoremongers' (p. 21). The Tarvokes' work, along with that of the rest of the wood-carvers and all the other guilds, is shipped off-world: "in the far worlds, to say 'a piece from Ambroy' is to say 'a jewel of perfection'" (p. 26). Life passes slowly for the craftsmen; "it is best to produce gay designs. Happiness is fugitive; dissatisfaction and boredom are real" (p. 42)

The tradespeople of Halma are in this manner provided for, but the Lords of Halma live elegantly at their expense:

"It happened perhaps fifteen hundred years ago. There were wars[...] wars without number. The last war[...] resulted in the destruction of the city. Ambroy was devastated; the towers were destroyed; the folk lived like savages. The lords arrived in space-ships and set all in order. They generated power, started the water, built transit tubes, reopened the sewers, organized imports and exports. For this they asked and were conceded one percent [of the value of everything produced and sold on the planet]. When they rebuilt the space-port they were conceded an additional eighteen hundredths [of a] percent, and so it has remained" (p. 49). It is implied in the text that for all their wealth, the Lords also succumb to ennui: "You don't think the life of the lords is all Gade wine and star-travel, do you? A good many of them find time hanging heavy on their hands" (p. 75)

Halma society is strictly ordered and its citizens are exhorted to adhere to the precepts of Finuka (p. 67). Worship and observance is largely signified by ritual leaping: 'The Guide Leaper explained the Elemental Pattern[...]: "the pattern, of course, is symbolic; nonetheless it provides an infinite range of real relevancies. By now you know the various tablets: the virtues and vices, the blasphemies and devotions which are represented. The sincere confirm their orthodoxy by leaping the traditional patterns, moving from symbol to symbol, avoiding vices, endorsing virtues. Even the aged and infirm endeavour to leap several patterns a day" (p. 66).

Amiante, and later Ghyl, are absorbed by the vaguely-known story of the legendary Halma hero Emphyrio, who died a martyr's death trying to broker peace with alien invaders. Ghyl marries his admiration for this classical hero with a desire to change living and working conditions in the novel's contemporary present: "life here is futility. We'll live and die, and realize no glimmer of truth. There's something terribly wrong here in Ambroy. Do you realize this?" (p. 105). In acknowledgment of this, he finds himself in the middle of a scheme "to [facilitate] the election of Emphyrio as mayor" (p. 87).

When this enterprise collapses, still dreaming of independence and liberation, Ghyl colludes with friends and noncups to hijack one of the Lords' space vehicle and kidnap the owners, conjoining his desire to explore the universe with an equally strong yearning to resolve the mystery of the conclusion of the Emphyrio legend by finding the legendary Historian: "I'd like to take the space-yacht, if only to find the Historian, who knows the entire history of the human race" (p. 127)

Betrayed and subsequently abandoned by his fellow pirates, Ghyl finds himself thrown together with the very Lords he had been attempting to hold to ransom near the city of Daillie on Maastricht, fifth planet of the star Capella (p. 141). Detaching himself from the Lords he now finds himself protecting on the basis that he expects them to denounce him when they reach civilization, Ghyl travels on to Daillie alone. On Granvia, a street packed with luxury goods dealers, Ghyl is taken aback to discover a reproduction of one of his father Amiante's screens, 'REMEMBER ME'. The original, he is told, is considered priceless on Maastricht, and "hangs in the Museum of Glory" (p. 159). After due consideration, with the help of the Maastricht traders he befriends Ghyl decides to attempt to break the trade cartel his home planet is kept in poverty by.

Daringly returning to Halma, Ghyl discovers that the craft guilds are unwilling to enter into any sort of trade agreement with him: "once we introduce innovation, we destroy equilibrium. Impossible!" (p. 167). On the discovers of his true identity, and having barely escaped execution for piracy and irregulationary behaviour, Ghyl breaks into the wood-carvers guild and 'forges' shipping documents using the official seal, thereby facilitating the export of a full load of firsts and acmes from the guild's bonded warehouse. The carved panels are sold on Earth, where "the great fortunes, the ancient palaces;[...] the money of connoisseurs" is still to be found (p. 178). Splitting the proceeds philanthropically between the guild, his fellow traders and himself, Ghyl achieves financial independence.

After a sojourn traveling around Earth, where 'everywhere[...] lay the weight of history' (p. 180), Ghyl turns his attention to the Historical Institute in London in order to satisfy his curiosity as to the mystery surrounding the legend of Emphyrio which Amiante possessed only a printed (and illegal) fragment of: "I have known half the legend since my childhood. I promised myself that if I ever were able to learn the rest, I would do so" (p. 185).

Towards the end of his travels, Ghyl encounters once again 'Framtree's Original Peripatetic Entercationers', a troupe of living marionettes owned by the puppeteer Holkerwoyd. Ghyl previously encountered Holkerwoyd early in the novel having attended a performance by the travelling troupe with his father whilst still a child (p. 13), during which he also sees the novel's fleeting lordly love-interest, Shanne, for the first time. He questions Holkerwoyd as to why the death of the puppet that enacted the legend of Emphyrio years previously was real rather than feigned.

Holkerwoyd replies that "the puppets are not useful forever. They become aware of the world, they begin to feel real. Then they are spoiled and must be destroyed before they infect the troupe[...] Would you like to see Emphyrio once more? I have a puppet who is becoming perverse. I have warned and scolded but I continually find him looking across the footlights to the audience" (p. 183). As Ghyl turns to leave, Holkerwoyd arrestingly imagines what will happen after his death: "The years come fast. Some morning they'll find me lying stark [sic], with the puppets climbing over me, peering into my mouth, tweaking my ears" (p. 183).

Ghyl does finally learn how the legend ends, and also becomes privy to some surprising facts about his father's dual life (p. 188), but on returning to Halma the ramifications of the legend's basis in fact and the way that it continues to influence the planet's destiny unfold fascinatingly to provide a meditative conclusion after the frantic planet-hopping in the last quarter of the work.

The tropes of social and economic control, directed action and puppetry that are richly woven through the novel afford Emphyrio a semantic density which is further augmented by the denouement's revelations. Perfectly paced, with a meditative start that builds to a climax of inter-galactic mystery solving, Emphyrio is a rich and rewarding novel.

'Emphyrio died imploring the dark ones to the ways of man, and that they should curb their begotten monsters. They refuted him; they hung him to the wall on a nail. But the monsters, at first insensate, were now, through truth, of all folk the easiest. If there be here lesson or moral, it lies beyond the competence of him who inscribes this record.' (p. 186)

"The deception must be ended; there must be restitution." (p. 204)
Tweet

Hey there, another great review. Read this one earlier in the year and thoroughly enjoyed it. A subtle yet powerful book. Have just started "Nova" and am saving your review until I've finished it.

Hi Mark, thanks for stopping by. Glad you like Emphyrio, and I'll be interested to hear what you thought of Nova.

Are you reading these titles in the Masterworks editions I am reviewing?

I've been collecting the books listed in the SF Masterworks as older editions. I've found collecting older paperbacks has been cheaper and more rewarding. The Philip K Dick titles have been the hardest to track down but I've managed to find them all. I'm planning on posting a slideshow on YouTube once I have all of the titles - the books I have make for a great history of SF cover art. I send you a link once it's complete.

Hi Mark. I look forward to seeing that - and thanks for the follow.

I read this novel many times when it first come out, it always stuck in my head.

Thanks for stopping by, and thank you for your comment. I'm sorry it took so long for me to notice it :)

The more I read of Jack Vance, the more I like him. I've noticed that the e-book only SF Gateway imprint has just published around 40 of his titles at GBP 2.99 each, so having recently bought a Kindle, I'll definitely be picking a few of these up.

Of course, I still have his FMW titles to review as well... :O