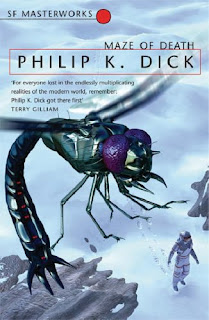 When marine biologists Seth and Mary Morley volunteer for a new post on the frontier world Delmak-O, they arrive to find a leaderless group of twelve other colonists with no idea as to what they are doing there. The situation is made worse by the malfunction of the satellite that is supposed to detail them as to the purpose of their assignment.

Then the colonists begin to die.

The fact that the chapter summaries in the prefatory matter of A Maze of Death bear no resemblance whatsoever to the events depicted in the book is hint enough that nothing will prove to be as it first appears in the next 180 pages.

All of Philip K. Dick's works have an eerie way of making you think they have been written with you in mind, which is both unsettling and yet also entirely in keeping with throb of paranoia that pulsates at the heart of almost all of his novels in some way. Hence, on the day I read A Maze of Death I had bought the ingredients to make a lamb curry (p. 24), and had taken delivery of a bottle of Seagrams whisky (p. 31) only a day or two before.

Dick's trademark ‘justifed paranoia’ suffuses the work. As usual, the author hints that there is a something outside the text that is trying to get into it: 'They’re experimenting with us, [Seth Morley] thought wildly. That’s what this is: an experiment. Maybe there never were any instructions on the satellite’s tape. Maybe it was all planned’ (p. 50). The characters share an uncomfortable sense that they are under observation, in much the same as Dick appears to have envisaged his readership pontificating over the factual basis of his relationship with the thematic concerns of his oeuvre: ‘He did not like the mixture of artificial life forms with the real ones; the mixing together of them made him sense the whole landscape as false… as if, he thought, those hills in the background, and that great plateau to the right are a painted backdrop. As if all this, and ourselves, and the settlement – are all contained in a geodetic dome. And above us Treaton’s research men, like entirely deformed scientists of pulp fiction, are peering down at us as we walk, tiny-creature-wise, along our humble way’. (p. 101)

A Maze of Death returns to another of what we might call 'Dick’s ticks', namely the structure and function of religious belief. On this occasion, Dick begins by positing that a god exists and that prayer is effective if ‘electronically transmitted through the network of god-worlds so that all Manifestations are reached’ (p. 52). Not surprisingly, this is not a hypothesis that the extraordinary conclusion of the work can necessarily affirm, but it does makes for a fascinating frame-within-a-frame through which to view the text. From the author’s foreword: ‘The theology in this novel is not an analogue of any known religion. It stems from an attempt by William Sarill and myself to develop an abstract, logical system of religious thought, based on the arbitrary postulate that god exists’ (p. 3). The visible manifestation of the power of faith is a reality in this novel: ‘I can understand there being widespread atheism in previous eras, when religion was based on faith in things unseen... but now it’s not unseen, as Specktowsky indicated’ (p. 88)

The core text in the colonist’s religion is Specktowskty’s How I Rose From the Dead in My Spare Time and So Can You (p. 9), which reconstructs the christian trinity in the form of the Mentufacturer, the Intercessor, and the Walker-on-Earth, opposing the death-urge personified in the Form Destroyer: ‘The thing about the Mentufacturer[…] is that he can renew everything. He can abort the decay process by replacing the decaying object with a new one, one whose form is perfect. And then that decays. The Form Destroyer gets hold of it – and presently the Mentufacturer replaces that[…] But I can’t do that. I decay and the Form Destroyer has me. And it will get only worse’ (pp. 10-11)

The vertiginous final chapters wherein the mystery of the shared tattoo, ‘Persus 9’ (p. 168), is revealed and the narrative is shown to have been part of another sequence of events altogether reveal the events that preceded it to have been ‘a comforting web[…] in particular the postulate that god existed’ (p. 181). However, when Seth Morley says ‘I wish to God[…] that there really was an Intercessor’ (p. 184), he should have been careful what he asked for. The reader is left to their own devices to try to make sense of what is happening as perceptions clash and fictive realities overlap in the work’s concluding pages.

If A Maze of Death has a theme, it could be said to be that in making a life for oneself among the ruins of our shortcomings (namely, our susceptibility to failure, our destiny to decay, and our universal ignorance), the ability to retain a sense of perspective is everything.

Whilst I am entranced by the idea that one should be motivated to walk away from a life that you have made for yourself on the basis that ‘the cheese is terrible here’ (p. 14), there are bleaker themes to muse upon. When the colonists are forced to consider their isolation on Delmak-O they concede that ‘we have one vast fear, and that is this: there is no purpose to us being here, and we’ll never be able to leave’ (p. 31)

Each of the colonists characterises a different shortcoming, and there is a little of the author - and also the reader - in all of them: ‘The thing we have in common is that we’re failures. Take Tallchief. Couldn’t you tell he’s a wino? And Susie – all she can think about is sexual conquests. I can make a guess about you, too. You’re overweight; obviously you eat too much[...] Babble is a hyochondriac. Betty Jo Berm is a compulsive pill-taker: her life is in those little plastic bottles. That kid, Tony Dunkelwelt; he lives for his mystical insights, his schizophrenic trances[…] Maggie, here,’ he gestured toward her. ‘She lives in an illusory world of prayer and fasting, doing service to a diety which isn’t interested in her.’ To Maggie he said, ‘Have you ever seen the Intercessor, Maggie?’ (p. 79)

The destructive work of the Form Destroyer also stalks the novel: ‘Maybe they were alright before they got here, and something here made them change. If that is so, it will change us, too[…]. Eventually.’ (p. 40) Accompanying this observation is a tangible fear of neither understanding how, nor even being aware of, such changes, and realizing that only those who observe you will notice. Except they too are changing in turn, and the processes of decay are perpetual and reciprocal.

It is also difficult not to become aware of the novel’s insistent reminders that humanity has reached a point in its evolution where it is not only wilfully ignorant, but also quite content to be so: ‘Each of you seems to be living in his own private world. Without regard for anyone else. It’s as if[…] all you want, each of you, is to be left alone’ (p. 76). ‘We live in a world created and manufactured from the results of the work of millions of men, most of them dead, virtually none of them given any credit[…] It wouldn’t matter[…] if this whole colony, everybody in it, died. None of us contribute anything. We’re nothing more than parasites, feeding off the galaxy’ (pp. 80-81).

There are numerous false starts and dead ends on the path to enlightenment within A Maze of Death, most notably in the form of the tench, which appears to be a ‘great globular mass of protoplasmic slush’ (pp. 171-72), but isn’t. The tench answers questions in a circular manner redolent of the I Ching: ‘I’m asking, “Why are we alive?”’ [Maggie Walsh] placed the paper before the tench and waited. The answer, when they had obtained it, read: ‘To be in the fullness of possession, and at the height of power’. (p. 127)

Ultimately, the author suggests that if we are prepared, or perhaps capable, of appreciating it for what it really is, there may be a redemptive spark within us that could be fanned into life: ‘Something to save us,[…] something to doom us. It – the equation of everything – could go either way’ (p. 89)

In the last instance, an assessment of A Maze of Death is a question of perspective: what you see, and what you want to see; what you accept and understand, and what you are trying to efface from memory and turn your thoughts away from. You will accept assistance in propagating the former’s illusory states of being until a time comes, as it does for Seth Morley in the penultimate chapter, when you realize you have to make a change. Assuming it ever arrives, the much-desired change may be neither what you expected, nor what you hoped for. Sometimes, it may even be a logical impossibility (‘But we invented you!’ (p. 187)), but that will not stop it happening. Beyond it, however, will be something else: the kernel of change to come.

As if perceived through distorting mirrors, the ways in which the thematic and narrative perspectives of A Maze of Death will be elongated in the stunning final two chapters of the work break out into the novel around half way through, although you do not realize this when reading it for the first time:‘You know, Specktowsky speaks about us as being “prisoners of our own preconceptions and expectations. And that one of the conditions of the Curse is to remain mired in the quasi-reality of those proclivities. Without ever seeing reality as it actually is’ (p. 102)

Bleak, confusing, and seductive, A Maze of Death is a fine entry in the SF Masterworks series and one of Philip K. Dick's most satisfying novels.

There are no end of SF books about colonizing other planets. I just read Zoe's Tale, by John Scalzi which falls firmly into that category. I just found it kinda neat to run across a review of another colony novel. I'll have to see if I can track down a copy of A Maze of Death. It's been way too long since I read a book older than me.

I'm about half way through "Maze Of Death" at the moment and am enjoying it so far. Saving your review for when I've finished the book.

This was a great review. I've read "Maze of Death" several times, but not recently--certainly not recently enough to remember where it was going. At Chapter 7, I wanted someone's take on why the chapter summaries had nothing to do with the actual content of the chapters. I think you nailed it. Lots of other good insights , too. Thanks!