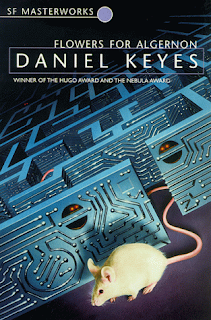 A 1960 Hugo-winning short story that was later expanded into a Nebula-winning novel in 1966, the first-person narrative of Daniel Keyes’ work in its long form begins with Charlie Gordon (IQ: 68) reflecting to the best of his current abilities on the possibility that the procedure to be performed on him may reconnect him with his family. The reasons as to why he is no longer in contact with them are unclear at this stage, but powerfully described later in the work: ‘I dint see my mother or father or my littel sister Norma for a long long long time. Maybe their ded to. Dr. Strauss askd me where they use to live. I think in brooklin. He sed they will see if maybe they can find them[…] If the operashun works and I get smart maybe Ill be abel to find my mom and dad and sister and show them. Boy woud they be serprised to see me smart just like them and my sister’ (pp. 4, 9)

The first signs of Charlie’s improved cognitive abilities manifest themselves within the confines of his workplace, a bakery: ‘I worked the dough-mixer and everybody was surprised epeshully Frank Reilly. Fanny Birden got exited because she said it took Oliver 2 years to learn how to mix the dough right and he went to bakers school. Bernie Bate who helps on the mashine said I did it faster then Oliver did and better. Nobody laffed. When Gimpy came back and Fanny told him he got sore at me for working on the mixer.’ (p. 25)

Throughout the work, Keyes considers the emotional strain of Charlie’s development from within and without. External observers such as Dr. Strauss, one the project’s co-ordinators advise him that “The more intelligent you become the more problems you’ll have, Charlie. Your intellectual growth is going to outstrip your emotional growth. And I think you’ll find that as you progress, there will be many things you’ll want to talk to me about. I just want you to remember that this is the place for you to come when you need help.” (p. 33)

The treatment Keyes envisages being capable of augmenting cognitive development combines psychosurgery, enzyme injections and psychosomatic programming (p. 48), and Charlie’s scholarly development is rapid: ‘My studies are going well. The university library is my second home now. They’ve had to get me a private room because it takes me only a second to absorb the printed page, and curious students invariably gather around me as I flip through my books.’ (p. 68)

Disappointment awaits him, however, in his discovery that the average academic’s cordon of knowledge is extremely narrow. He quizzes an economics professor on the political implications of economic policies adopted by the American government between the 1918 and 1939: ‘He listened quietly, staring off into space, and I assumed he was collecting his thoughts for an answer, but a few minutes later he cleared his throat and shook his head. That, he explained apologetically, was outside his field of specialization[…] The same thing happened when I tried to discuss Chaucer with an American literature specialist, questioned an Orientalist about the Trobriand Islanders, and tried to focus on the problems of automation-caused unemployment with a social psychologist who specialized in public opinion polls on adolescent behaviour. They would always find excuses to slip away, afraid to reveal the narrowness of their knowledge.’ (pp. 68, 69). Similarly, Charlie finds it ‘terrifying’ (p. 104) to hear academics confess to ignorance of vistas of their own disciplines, let alone those that lay outside them, and is soon led to conclude that even his own mentors are ‘Frauds[…] They had pretended to be geniuses. But they were just ordinary men, working blindly, pretending to be able to bring light into the darkness. Why is it that everyone lies? No-one I know is what he appears to be.’ (p. 105)

Keyes, who clearly has a rather jaundiced view of the academic life, has his protagonist proclaim himself to have ‘learned that intelligence alone doesn’t mean a damned thing. Here in your university, intelligence, education, knowledge have all become great idols. But I know now there’s one thing you’ve all overlooked: intelligence and education that hasn’t been tempered with human affection isn’t worth a damn.” (p. 173)

Things also take a rapid turn for the worse at the bakery as Charlie's IQ burgeons: ‘And so it went[...] It had been all right as long as they could laugh at me and appear clever at my expense, but now they were feeling inferior to the moron. I began to see that by my astonishing growth I hade made them shrink and emphasized their inadequacies. I had betrayed them, and they hated me for it.’ (p. 74).

Algernon’s capabilities quickly develop to the point where Strauss feels the need to remind him that if he is to communicate effectively, he must pitch his discourse at a level his academic audience can understand: ‘Strauss again brought up my need to speak and write simply and directly so that people will understand me. He reminds me that language is sometimes a barrier instead of a pathway. Ironic to find myself on the other side of the intellectual fence.’ (p. 79)

Charlie liberates Algernon, the mouse upon which his treatment was successfully conducted (or so it appeared) in animal trials, at a dinner held to mark the success of the experiment: ‘“Come on,” I said, “We’ll get out of here together.” He let me pick him up and put him into my jacket pocket. “Stay in there quietly until I tell you.”[…] “I’ll just get my things packed,” I said, “And we’ll take off – just you and me – a couple of man-made geniuses on the run.”’ (pp. 114, 115)

After some prevarication, Charlie decides to visit his father, now estranged from his mother, who is running a barber’s shop. Not surprisingly, his parent does not recognize him: ‘How could I tell him? What was I supposed to say? Here, look at me, I’m Charlie, the son you wrote off the books? Not that I blame you for it, but here I am, all fixed up better than ever. Test me. Ask me questions. I speak twenty languages, living and dead; I’m a mathematical whiz, and I’m writing a piano concerto that will make them remember me after I’m gone. How could I tell him? How absurd I was sitting in his shop, waiting for him to pat me on the head and say “Good boy”. I wanted his approval, the old glow of satisfaction that came to his face when I learned to tie my own shoelaces and button my sweater. I had come here for that look in his face, but I knew I wouldn’t get it.’ (p.131)

There still moments of calm at the centre of the novel where Charlie can both look back at what he was and forward to what he may become, although the rising fear of a reciprocal decline in his powers cannot be quelled: ‘I have often reread my early progress reports and seen the illiteracy, the childish naïveté, the mind of low intelligence peering from a dark room, through the keyhole, at the dazzling light outside. In my dreams and memories I’ve seen Charlie smiling happily and uncertainly about what people around him are saying. Even in my dullness I knew I was inferior. Other people had something I lacked – something denied me. In my mental blindness, I had believed it was somehow connected with the ability to read and write, and I was sure that if I could get those skills I would have intelligence too[…] That’s the problem, of course. I don’t know how much time I have. A month? A year? The rest of my life? That depends what I find out about the psychophysical side-effects of the experiment.’ (pp. 139, 146)

It is difficult to state with precision when Charlie’s decline commences as Keyes draws the reader into his protagonist’s attempt to explain to himself what the grey areas that begin to encroach on the margins of his consciousness may signify. On the one hand, he senses himself to be ‘on the edge of it. I sense it. They all think I’m killing myself at this pace, but what they don’t understand is that I’m living at a peak of clarity and beauty I never knew existed. Every part of me is attuned to the work. I soak it up into my pores during the day and at night – in the moments before I pass off into sleep – ideas explode into my head like fireworks. There is no greater joy than the burst of solution to a problem’. (p. 167) On the other (as is this, perhaps, where the regression begins?), he wishes to convince himself that he has ‘gone as far as [he] can on a conscious level, and now its down to those mysterious operations below the level of awareness.’ (p. 168)

Either way, however, he is aware of the fact that his experience has, for a time at least, allowed him to rise above those ‘souls withered from the beginning, and doomed to stare into the time and space of every day[…] Whatever happens to me, I will have lived a thousand normal lives by what I might add to others not yet born.’ (pp. 160-61, 167)

The decline of Charlie’s powers is rapid. The decline of his self-study into the ‘Algernon-Gordon Effect’ concludes emphatically that ‘ARTIFICIALLY-INDUCED INTELLIGENCE DETERIORATES AT A RATE OF TIME DIRECTLY PROPORTIONAL TO THE QUANTITY OF THE INCREASE.’ (p. 177)

‘Algernon died two days ago[…] Dissection shows that my predictions were right. Compared to the normal brain, Algernon’s had decreased in weight and there was a general smoothing out of the cerebral convolutions as well a deepening and broadening of brain fissures.’ (pp. 179-180)

‘I put Algernon’s body into a small metal container and took him home with me. I wasn’t going to let them dump him into the incinerator. It’s foolish and sentimental, but last last night I buried him in the back yard. I wept as a put a bunch of wild flowers on the grave.’ (p. 180)

‘October 3 - Downhill. Thoughts of suicide to stop it all now while I am in control and aware of the world around me. But then I think of Charlie waiting at the window. His life is not mine to throw away. I’ve just borrowed it for a while, and now I’m being asked to return it.’ (pp. 193-94).

The power of Daniel Keyes’ best-known work resides in its ability to provoke the reader to consider how their own cognitive abilities shape their view of the world. Do we perceive everything that we are capable of perceiving? Are we even capable of ascertaining what we may be missing? Would it be possible to connect with that which seems to elude us if we could better ourselves? And if we could, what imperceptible potentialities may reside beyond, receding into an infinite realm of experience, denied to us in stages? Are our own powers waxing or waning? Are we any more or any less ourselves, or our lives of more or less value as a consequence?
Tweet