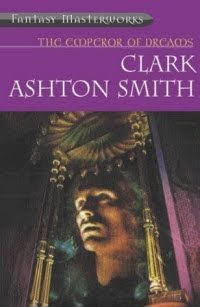 Entitled The Emperor of Dreams, Fantasy Masterworks 26 compiles forty-four of Clark Ashton Smith’s (1893-1961) short stories, book-ended by a short essay of Smith’s entitled ‘On Fantasy’ together with his poem ‘Song of the Necromancer’, and an excellent concluding afterword by Stephen Jones. A much-vaunted friend and contemporary of H.P. Lovecraft and Robert E. Howard, Smith attained a contemporary cult following through the publication of his short prose in pulp titles such as Weird Tales. His rich, decadent writing has continued to seduce admirers of speculative fiction since he abandoned its composition in the mid-1930s.

I read this Fantasy Masterworks collection intermittently over the space of six months or so. The cumulative effects of Smith’s obsessive repetition of certain tropes (omnipotent, deranged necromancers; exotic near-eastern locales; unknown terrain within familiar locales; the mastering of protagonists' volition, and their subsequent unwilling actions) have a certain narcotic quality. They’re too potent to consume in excess over a short period of time; too addictive to leave aside indefinitely.

Despite its brevity, Smith’s short essay ‘On Fantasy’ provides some interesting pointers as to the author’s outlook both on life and his creative undertakings: ‘People who cannot endure anything with a tinge or trope of fantasy, should confine their reading to the census-returns’ (pp. 1-2); ‘Truth is what we desire it to be, and the facts of life are a masquerade in which we imagine that we have indentified the masquers.’ (p. 2)

Previously unencountered, unfamiliar zones within otherwise well-known areas are something of an obsession in Smith's work. His characters frequently find themselves within ‘a clueless maze of unreality, of deception and dubiety, where nothing [is] normal or familiar or legitimate.’ (p. 93). Similarly, readers quickly learn not to be surprised when a protagonist declaims ‘somehow, in that deceptive fog, I managed to lose my way, to miss the mile-post that would have given me my direction to the town where I had planned to spend the ensuing night.’ (p. 110).

Characters are frequent symbolically as well as topographically disorientated: “I must find my kingdom[...] I am lost in darkness, amid uncouth things, and how I have wandered here I can not remember.” (p. 320); ‘At last he found the switch; but the illumination that responded was somehow dim and insufficient.’ (p. 375).

In a similar vein, I couldn’t help but smile when one of Smith’s first-person narrators contemplates undertaking an experiment I myself conduct on a nightly basis: ‘Perhaps, if I had plenty of high-proof Scotch and Bourbon, I could walk out of this particular time-plexus into something quite different.’ (p. 538)

There is more than a mere gloss of antipathy to worldly wealth in Smith’s writing, possibly precipitated by his own precarious financial circumstances (which are well-detailed in Jones’ afterword), or perhaps engendered by an overarching belief in the futility of the pursuit of money in light of the eternity of nothingness that awaits outaide his imaginary environs, and beyond his and his readers’ lives.

The gory end appointed to the prosperous victims of the Ghorii is a case in point: ‘They and their drivers were buried from sight by the ravenous monsters, who began to devour them immediately. Boxes of jewels and bales of rich fabrics were torn open in the melee, jasper and onyx idols were strewn ignominiously in the dust, pearls and rubies, unheeded, lay weltering in puddled blood; for these things were of no value to the Ghorii.’ (p. 285).

Characters and races we encounter elsewhere in the collection who express as interest in the pursuit of financial gain are neither well-regarded nor likely to be granted a felicitous destiny by their creator: ‘This people, it seemed, were most regrettably materialistic and had long ceased to offer sacrifice and prayer to the gods; though they spoke of them with a sort of distant respect and no actual blasphemy’ (p. 80).

Stephen Jones traces Smith’s relationship with H.P. Lovecraft adroitly in his afterword, and the influence of the latter upon the former is easy to detect: ‘I have continual need of modern crowds, of glaring lights, of laughter and clangour and tumult to reassure me; and always I am afraid that such things are only an insubstantial barrier; that behind them lies the realm of ancient horror and immemorial malignity of which I have had this one abominable glimpse. And always it seems to me that the veil will dissolve at any moment, and leave me face to face with an ultimate Fear.’ (p. 89)

‘Thin is the veil betwixt man and the godless deep. The skies are haunted by that which it were madness to know; and strange abominations pass evermore between earth and moon and athwart the galaxies. Unnamable things have come to us in alien horror and will come again. And the evil of the stars is not as the evil of Earth.’ (p. 181)

‘The formula, at frequent intervals, was cadenced with fatal names of lethal gods; and in it were told the secret appellations of the black god of time, and the Nothingness that abides beyond time.’ (p. 280)

‘There came to him the ineffably horrifying sensation of passing beyond his proper self, beyond all that he knew as legitimate and verifiable.’ (p. 518)

A certain dark eroticism pervades Smith’s work, showing him to have been the inheritor of the continental tradition of decadence embodied in the likes of Baudelaire and Huymans: ‘Those that were fairest, whom the plague and the worm had not ravaged overmuch, they took for their lemans and made to serve their necrophilic lusts.’ (p. 132)

Smith’s desciption of the lascivious ‘half-human fiend’ (p. 397) Ujuk is viscerally graphic: ‘His teeth clashed audibly, his eyes glowed in their pouches like beads of red-hot metal, as he withdrew from his position over the girl and loomed monstrously erect before her amid the ruins of the chamber.’ (p. 401)

Towards the end of the anthology, we encounter a mage intent on cultivating human members on vegetable matter: ‘consumately, and with never failing success, the magician had joined [various parts and members of human beings] to the half-vegetable, half-animate stocks on which they lived and grew thereafter[…] there were other graftings, too obscene or repellent for narration.’ (p. 441)

Smith’s libidinal musings are not without a certain moribund humour: ‘Thinking of the mountainous female they had seen, Morghi was prone to remember his sacerdotal vows of celibacy and Eibon was eager to take similar vows upon himself without delay’ (p. 82); ‘Whenever he paused to recover his breath, Eibon would say to him: ‘Think of the national mother,’ and Morghi would climb the next acclivity like an agile but somewhat asthmatic mountain-sheep’. (p. 84)

‘They have christened me in their own tongue The-One-who-cannot-be-cooked.’ (p. 540)

Stephen Jones’s valuable afterword, ‘The Lost Worlds of Klarkash-Ton,’ is a valuable setting for the jewel-like writings preceding it ‘“I am far happier when I can create everything in a story – including the milieu,” Smith wrote to Lovecraft in 1930. “I haven’t enough love for, or interest in, real places to invest them with the atmosphere that I achieve in something purely imaginative.” Amongst the fantastic locales Smith created were the pre-historic continent of Hyperborea; the super-civilization of Atlantis, also known as Poseidonis, and the alien worlds of Xicarph and Mars. However, his most successful imaginary regions were Zothique – the last inhabited continent on Earth, where sorcery and demonism prevail again as in ancient days – and the vampire-haunted medieval province of Averoigne.’ (pp. 562-63)

‘In a 1930 letter to Lovecraft, Smith likened his prose to “a verbal black magic, in the achievement of which I make use of prose-rhythm, metaphor, simile, tone-colour, counterpoint, and other stylistic resources, like a sort of incantation.”’ (p. 565)

‘Decline in the family finances resulted in Smith taking a number of menial jobs such as well-digger, fruit-picker and packer, wood-chopper, typist, cement-mixer, gardener, hard-rock miner, mucker and windlasser, to support himself. “Though his verse may occasionally sound as if Smith lived in an ivory tower,” explained [August] Derleth, “this is far indeed from the facts.”’ (p. 568)

A work which both invites and repays rereading, The Emperor of Dreams is an excellent addition to the Fantasy Masterworks series.
Tweet