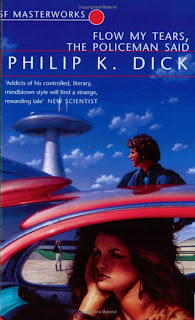 He could feel within his brain the powerful six-determined constituents moving already into focus. I am not like other men, he told himself. I will get out of this, whatever it is. Somehow. (p. 25)
Jason Taverner is a 'six', 'sixth in a line of DNA reconstruction systems' (p. 118), one of four living examples of a eugenic experiment (p. 117), 'an elite group, bred out of aristocratic prior circles to set and maintain the mores of the world, who had in practice drizzled off into nothingness because they could not stand one another' (p. 120). A light entertainment TV show host and recording artist of repute, Taverner awakes subsequent to having been attacked to find himself in a decrepit hotel room with $5,000 dollars in his pocket and no identity. Neither his ID cards, nor his personal history, nor his professional standing remain as he remembers them. Indeed, the very details of his birth appear to have been effaced from the public records.

'Am I being paid back for something I did? he asked himself. Something I don't know about or remember? But nobody pays back, he reflected. I learned that a long time ago: you're not paid back for the bad you do nor the good you do. It all comes out uneven in the end. Haven't I learned that by now, if I've learned anything?' (pp. 65-66).

A heavily-scrutinsed police state 'rules... society', a 'legacy of the [student-led] Second Civil War... from pigs to pols. In one easy jump' (p. 180). The operations of the ideological state apparatus that forms the novel's setting sees Taverner come to the attention of Police General Felix Buckman, who is perplexed by his subject's non-status and concludes that he 'must wait for him to figure it out... and be there with him, either physically or electronically, when it happens' (p. 126). Buckman and his sister Alys maintain an incestuous relationship that has produced a son. Alys proves to be central to the novel's denouement, and her first encounter with Taverner begins to tie together the protagonist's previous reality with his currently existing one (p. 132):

Subsequent to a disorientating, drug-fuelled crisis with a startling and apparently incomprehensible conclusion at the Buckman's apartment, Taverner flees and encounters the potter Mary Ann Dominic with whom he seeks sanctuary in a restaurant fitted out with a jukebox that contains his latest hit record. With his reality 'leaking back' (p. 159), Taverner is haunted by the thought that his entire career is a 'retroactive hallucination' and that he 'only exist[s] so long as [he] take[s] the drug' that Alys gave him:


Maybe I am only one of a great number of people leading synthetic lives of popularity, money, power by means of a capsule. While actually living, meanwhile, in bug-infested, ratty old hotel rooms. On skid row. Derelicts, nobodies. Amounting to zero. But, meanwhile, dreaming (p. 160)

As Taverner succumbs to the strain of disparate realities coalescing in his person and gives himself up to Buckman, so the author appears to step forward in order to give voice to an inner monologue that sounds very little like the voice of the protagonist as we have come to discern it:


Fucking dope, he thought. You can always tell when it hits you but never when it unhits, if it ever does. It impairs you forever or you think so; you can't be sure. Maybe it never leaves. And they say, Hey man, your brain's burned out, and you say, Maybe so. You can't be sure, and you can't not be sure. And all because you dropped a cap, or one cap too many that somebody said, Hey, this'll get you off (p. 157).

The work's title comes from the author's depiction of Felix Buckman's meditations whilst listening to recordings of John Dowland's 'Lachrimae Antiquae Pavan' which he describes as 'the first piece[...] of abstract music'. Why the book is not consequently called Flow My Tears, The Policeman Thought I have yet to fathom (p. 96).

Chapter 11, a philosophical reckoning in the middle of the work, constitutes its thematic and physical centre. Taverner's pursuit of his identity takes him to the Las Vegas apartment of a former lover, Ruth Rae, who also fails to remember him. Taverner and Rae, who has a succession of failed relationships behind her, rehearse their necessarily (in view of the former's predicament) different perspectives on love, life and loss: 'you call them up on the phone one day and say, "This is Jason," and they say "Who?" and then you know you've had it. They don't know who the hell you are. So I guess they never did know you; you never had them in the first place' (p. 103).

The ambiguities that the novel has built upon are promptly exploded by the author in the twenty-seventh chapter (pp. 183-98) wherein an over-reaching concept is over-explained in a manner unusual for Philip K. Dick.

By the mid-1970s, whilst his literary powers may arguably have already peaked, Dick was approaching the height of his personal psychoses. With the author as Taverner ('I don't want to be hunted any more'), and Buckman as a representative of the state authorities Dick believed to be pursuing him ('To live is to be hunted' (p. 188)), the author/protagonist-policeman/state stuctures 'play roles' and 'occupy positions' (p. 191) on the way to the conclusion that 'the real, ultimate truth is that despite your fame and your great public following, you are expendable... and I am not. That is the difference between the two of us. Therefore you must go, and I remain' (p. 192). Which is which is, of course, a matter of indeterminacy: a state of textual and topical ambivalence which is a function of the the thematic forces that Dick has set in play, but which elude his grasp and exceed the limits of authorial perception.

Flow My Tears, The Policeman Said is a quick, entertaining read, but it my opinion does not merit inclusion in the SF Masterworks series, which is heavily over-represented with Philip K. Dick's work.