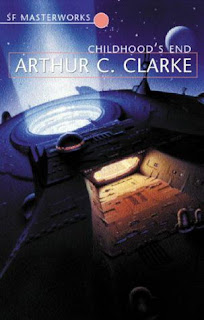 'They would never know how lucky they had been. For a lifetime, mankind had achieved as much happiness as any race can ever know. It had been the Golden Age. But gold was also the colour of sunset, of autumn: and only Karellen's ears could catch the first wailings of the winter storms' (p. 145)

Arthur C. Clarke's 1953 text, which the author tinkered with in 1990, begins with one of the classical tropes of written and cinematic SF, namely the appearance of spaceships over Earth cities. Rather than descending into the usual tiresome sequence of 'zapping the aliens' with its attendant consequences, Childhood's End take a rather more thoughtful turn.

The work is framed by a strongly anti-theistic and anti-authoritarian stance. Karellen, the alien ambassador overseeing the Overlords' tenure on Earth says: 'science can destroy religion by ignoring it as well as by disproving its tenets. No-one ever demonstrated, so far as I am aware, the non-existence of Zeus or Thor, but they have few followers now' (p. 17). The author also goes so far as to suggest that existing political arrangements are descending into entropy: 'even before the Overlords came to earth, the sovereign state was dying. They have merely hastened its end: no one can save it now – and no one should try' (p. 41)

The aliens reveal themselves after fifty years of sporadic communications and little else, and the reason for their reticence in manifesting themselves in their physical form becomes immediately apparent. The trust generated by their benevolent presence over the five intervening decades diminishes the shock of their appearance, as does their giving freely of their technologies. In so doing, the Overlords serve to create a society which 'by the standards of all earlier ages[...] was Utopia. Ignorance, disease, poverty, and fear had virtually ceased to exist. The memory of war was fading into the past' (p. 70).

With more opportunities to pursue creative endeavours, 'the general standard of culture was at a level which would once have seemed fantastic. There was no evidence that the intelligence of the human race had improved, but for the first time everyone was given the fullest opportunity of using what brain he [sic] had' (p. 115). Nevertheless, the future prospects for such a society seem brittle to those who consider them: 'among all the distractions and diversions of a planet which now seemed well on the way to becoming one vast playground, there were some who still found time to repeat an ancient and never-answered question: Where do we go from here?' (p. 117) 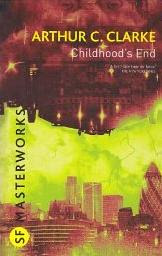 The disclosure of the Overlords' ultimate role within the narrative inverts the menacing threat that they originally seemed to pose, and instead makes them rather pathos-inducing figures: 'we have never been more than your guardians, doing a duty imposed upon us from – above. That duty is hard to define: perhaps you can can best think of us as midwives attending a difficult birth. We are helping to bring something new and wonderful into being[...] but we ourselves are barren' (p. 190).

Whilst it may denude the work of any sense of mystery that the first two thirds have worked reasonably hard to develop, Clarke ultimately leaves the reader in no doubt as to what happens on earth, setting out rather too baldly the events' significance from a wider galactic perspective. Because of the lack of light and shade the work exhibits in relation to its subject, saying any more about these revelations is not possible without saying too much.

Clarke's tone can be hectoring and haughty, his rhetorical gestures irritating, and his craft as a writer rather less than accomplished at times. However, as a fast-moving yarn delivering a big-concept payoff Childhood's End deserves it place within the SF Masterwork series.