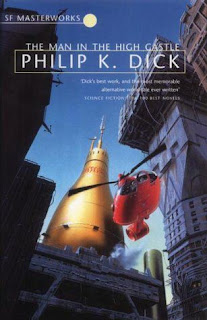 The wall falls back into the moat.
Use no army now.
Make your commands known within your own town.
Perseverance brings humiliation.

Undeterred by the unfavourable reading of the I Ching, Frank 'Goldfish' Frink muses 'I should take my tools[...] be working, creating in my own way right up to the end, living as best I can, as actively as possible, until the wall falls back into the moat for all of us, all mankind' (pp. 54-55)
Philip K. Dick's 1962 work The Man in the High Castle is an alternate history set in a fictional world within which the Axis powers were victorious in the Second World War and the political map of the world has been redrawn accordingly.

It is a book about chance, belief, the shaping of fate and the making of history in a figurative and literal sense. The interpretation and manipulation of history is the dominant theme of the work at both a personal and a societal level.

From the former perspective, the I Ching serves to influence the decisions of the work's protagonists, Frank and Juliana Frink, who although formerly married do not encounter oneanother in the novel's time line. 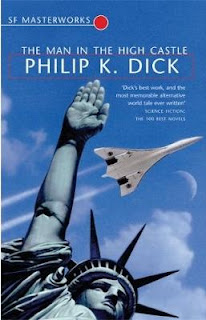 From the latter, the novel-within-the-novel entitled The Grasshopper Lies Heavy by Hawthorn Abendsen, who appears in the work towards its conclusion, posits an historical outcome to the Second World War which will be more familiar to the reader and which informs the work's thrilling conclusion.

'Now one appreciates Saint Paul's incisive word choice... seen through glass darkly not a metaphor, but astute reference to optical distortion. We really do see astigmatically, in fundamental sense: our space and our time creations of our own psyche, and when these momentarily falter - like acute disturbance of middle ear' (p. 225)

The Man in the High Castle is often introduced as Dick's greatest work, and its intricate world-building, ability to create a firm sense of place within the context of the societal alterity it crafts, and the prismatic, shifting perspectives of its inner textual histories provide ample support for this assertion.

The text reveals itself in a precise and satisfying manner, akin to unfolding the geometries of a piece of crisp origami:

'One by one Hawth made the choices. Thousands of them. By means of the lines. Historic period. Subject. Characters. Plot. It took years. Hawth even asked the oracle what sort of success it would be. It told him that it would be a very great success, the first one of his career. So you were right. You must use the oracle quite a lot yourself, to have known' (p. 245)

Although #72 is printed on the spine, this should be #73 in the series. 72 had already been used for Heinlein's The Moon Is a Harsh Mistress.

Dave, you're absolutely right. Thanks for the correction. I seem to recall that Orion dropped a similar clanger somewhere in the 30s of the series. I need to check that. OK, off to edit some code :)

Yes, I was rather narked about the hardbacks, too. I'm guessing Orion just doesn't have the paperback rights for these titles.

The new binding seems to offer no continuity in this regard either, sadly.