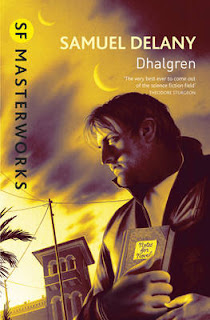 Delany's Dhalgren is perhaps the literary nadir of the 1970s fashion for 'finding oneself' in a very public and self-indulgent manner. Right down to the protagonist's addiction to writing terrible, self-obsessed poetry, the myopic, preening pomposity of the work seems childish and such insights as it has to offer appear glaringly obvious to the contemporary reader 40 years after the fact. However, from a more charitable perspective the novel's preoccupations are also entirely understandable when considered within the context of its own historical moment.

Flawed though it may be, Dhalgren is also an hypnotic, transcendent meditation on the mysterious and elusive nature of what Martin Heidegger called dasein or 'Being-in-the-World'.

The urban environment within which the novel is set smoulders like a 1970s American inner city after a riot, and we discover that 'you've got to walk around in it, because there isn't anything else' (p. 225).

Upon entering the ruined, burning city of Bellona, the initially anonymous protagonist, who comes to be called Kidd before before discovering (possibly) his identity later in the work, is both anti-heroic and yet also an Everyman figure. Both 'good and bad at once' (p. 661), Kidd is paradox personified, and is described as having 'lost bits and pieces of [himself]' (p. 769). As the narrative in this experimental work shifts from the third to the first person, and even bifurcates to offer twin pathways through its final third, the reader is left to ponder the reason for his ruined hands (p. 440) and what his hallucinations signify (p. 385).

Bellona is both identical with and symbolic of the lives of the characters played out inside it. Within its confines we encounter a panoply of characters the scope and scale of which is Dickensian in aspiration, with headonists, aesthetes, thugs, scholars, prophets and those who are 'nice in a useless sort of way' (p. 260) wandering, wondering, loving and brawling through its pages. Much like its protagonist, the reader comes to understand that within this work 'if people are busy living out myths you don't like, leave them to it' (p. 24).

Delany quickly establishes the unlikely but nevertheless existing pre-conditions for the possibility of his characters to survive within this disintegrating space, with subsistence in the form of accommodation, food, and company appearing to be freely available although even the characters accept this to be an impossibility (p. 377). With the acquisition of money as a means of survival having been rendered unnecessary, the author affords his characters the liberty to focus on the rather more challenging question of what their lives mean: 'how else are we to retain the inflationary coinage and cheap paper money of sanity and solipsism? (p. 481).

Delany goes to some lengths to disorientate the reader as if to remind them that there are no truths to be found within the work, just as the lived experiences of its characters (and also its readers) are incapable of providing definitive answers to any of the questions that they may ask. Like the questing restlessness of the human spirit, Bellona is a journey rather than a destination. Wreathed in smoke and flame, its shattered urban geography morphs constantly, with distances altering, street signs changing, and time dilating (p. 327; pp. 363, 367, 414). Characters muse as to what has happened in the city (p. 371) which seems to have assumed the status of a place of pilgrimage. However, the majority of Bellona's population gives the impression of being transient, just as the protagonist himself is at the beginning of the work, and as those individuals are whom he meets when leaving the city at its conclusion in search of that which 'would be better than here' (p. 801).

Dhalgren is full of mysterious artefacts: knife-like weapons that encase the hand known as Orchids (p. 557), red eye caps (p. 555), lamps that project colourful holograms of animals and beasts of myth and legend around the person of their wearer, and the strange 'optical chains' (p. 553) worn around the body, the adorning of oneself with which seems to manifest in some way a willing enslavement to the urban environment.

One of the things that irritated me about Delany's Nova (1968) was the author's apparent inability to restrain himself from name-dropping philosophers and their tropes, seemingly for no reason other than to indicate to the reader that he had heard of the thinkers in question. Sadly, this is not a habit that the he appears to have been able to rid himself of in the intervening years, and Dhalgren too is blighted by Delany's embarrasing info-dumps (pp. 470, 531, 625 et al).

Despite its shortcomings, Dhalgren remains a rich and extraordinary addition to the SF Masterworks series. Its graphic content, looping, rambling structure and elusive nature may not be to every reader's taste, but for those who are willing to lose themselves within its bewildering topography, there is much pleasure to be found.

'Apocalypse has come and gone. We're just grubbing in the ashes' (p. 745)
Tweet

I found the review most helpful. I spied a copy of Dhalgren at my local used bookshop and almost bought it (carried it around in the store for a while. I had no idea it was such a brick of a book and wanted to see a more in-depth review before committing to it. I haven't read Delaney before, and after reading your review I think I'll reconsider Dhalgren after I've read some of his other stuff, probably Babel 17 since I have a copy of that at home.

I enjoyed the balance of the book's merits and shortfalls in your criticism. Very constructive and informative.

Thanks for taking the time to leave a comment.

I'll be very interested to hear what you made of the work subsequent to your having read it.

I think Dhalgren is perhaps one of the most difficult books in SF to review. You made a valiant effort. I'm not sure it completely succeeded in characterizing the book well, but then it's one of my all time favorite books, so it's unlikely I'd find many reviews of it satisfactory. Interestingly, the Wikipedia entry on this book is quite good. I think it's a shame the previous commenter was led away from Dhalgren by the review. A better test of whether one would like Dhalgren than Babel-17 would be a reading of Trouble on Triton or Trition, as it was originally called.

Thanks for having taken the time to leave a comment, NR. I don't think any one review of Dhalgren, or even an anthology of every review that has ever been written, are going to adequately define the work's fluid, transient nature.

One of Delany's ambitions in writing the work appears to have been to compose a work that defied description.

I think he did a pretty good job in that regard. ;)