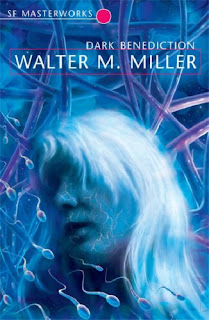 Best known for his Hugo Award-winning A Canticle For Leibowitz (1959), Walter M. Miller Jr also authored dozens of stunning short stories in the 1950s, 14 of which are gathered together in this highly attractive entry into the SF Masterworks series.

The tales are not of uniform quality, but the work's best pieces rank among the very finest examples of the short form in the canon of speculative fiction. Miller's mastery of the post-apocalyptic sub-genre, his struggle to make sense of religious convictions, his attractive, sparse style and the manifestation within his work of the depression it is suggested that he lived with prior to his suicide in 1966 combine to produce a complex, satisfying corpus which merits frequent revisiting.

A child's frantic combing of the future for a cure which medical science has failed to provide for him in 'The Will' (1954) is compelling and mysterious, whilst 'Anybody Else Like Me' (1952) presents meditations on evolutionary telepathy presented in the disturbing contexts of rape.

Construction worker Manue Nanti struggles to come to terms with the atrophying of his lungs in 'Crucifixus Etiam' (1953) on a Mars without faith:


'Faith needed familiar surroundings, the props of culture. Here there were only swinging picks and rumbling machinery and sloshing concrete and the clatter of tools and the wheezing of troffies. Why? For five dollars an hour and keep?' (p. 57).

A 'machine' comes to a sacrificial self-awareness in 'I, Dreamer' (1953) as it learns the truth about its origins, while 'Dumb Waiter' (1952) presents a brilliantly conceived parable about humanity's limited capacity to perceive both its salvation and destruction in the self-regulating yet vulnerable technology it develops as an engineer struggles to save a civilization his peers are intent on destroying:


'Humanity has waited a hundred thousand years before deciding to build technological civilization. If he wrecked this one completely, he might never decide to build another [...] Some men thought that the a return to the soil was desirable. Some men tried to pin their guilt on the machines, to lay their own stupidity on the head of a mechanical scapegoat and absolve themselves with dynamite. But Mitch Laskell [...] liked the purr of a pint-sized nuclear engine much better than the braying of a harnessed jackass' (p. 88).

'Conditionally Human' (1952) is one of the anthology's highlights. The protagonist sets about righting the wrongs the state's strict control of the conditions of reproduction have wrought, 'knowing that it would never be all right [...] as long as the prohibiting, the creating, the killing, the mockery, the falsification of birth, death and life continued [...] He hoped Man could fit into it somehow' (pp. 235, 265).

'Dark Benediction' (1951) provides the volume's titular inspiration and forms its conceptual centre. The story offers a stirring, thematically multi-faceted study of our primitive responses to crises, fear of difference, and qualified contextualization of unexpected and societally transformative change. 'Dark Benediction' provides the reader with an opportunity to reflect upon the fact that destiny is not ours to control, and that unstoppable external forces could radically alter what it means to be human. Our curiosity, the story suggests, could be the death of us in the face of an implacable evolutionary process over which we have no influence; humanity, the story suggests, is not a Leibnizian monad, and we should perhaps be grateful for the universe's attention, whatever the outcome.

Regardless of other stories of lesser quality that it contains, 'Dark Benediction' is an excellent entry into the SF Masterworks catalogue. Miller's perspectives on his topics are usually engaging, often challenging, and occasionally macabre in the extreme; see 'Vengeance For Nikolai' (1957), with a plot as outlandish as anything Jacobean Tragedy has to offer.

'When the machine age cracks up, you crack up, too. Because you never made yourself its master; you just let yourself be mechanically pampered' (p. 105).