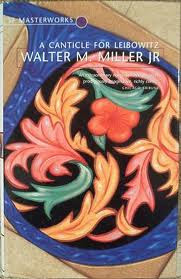 'Over each city a sun appeared and was brighter than the sun of heaven, and immediately that city withered and melted as wax under the torch, and the people thereof did stop in the streets and their skins smoked and they became as fagots thrown on the coals. And when the fury of the sun had faded, the city was in flames; and a great thunder came out of the sky, like the great battering ram PIK-A-DON, to crush it utterly. Poisonous fumes fell over all the land, and the land was aglow by night with the afterfire which caused a scurf on the skin and made the hair to fall and the blood to die in the veins' (p. 198)

'From the confusion of tongues, the intermingling of the remnants of many nations, from fear, the hate was born. And the hate said: Let us stone and disembowel and burn the ones who did this thing. Let us make a holocaust of those who wrought this crime, together with their hirelings and their wise men; burning, let them perish, and all their works, their names, and even their memories. Let us destroy them all, and teach our children that the world is new, that they may know nothing of the deeds that went before. Let us make a great simplification, and then the world shall begin again.' (p. 72)

A cornerstone of the post-apocalyptic SF sub-genre, 1961 Hugo winner A Canticle for Leibowitz (1959) was the only novel Walter M. Miller Jr published in his lifetime. The work emerged from short stories that Miller published separately, rewritten as the three parts of the final text: Fiat Homo ('Let there be man'), Fiax Lux ('Let there be light'), and Fiat Voluntas Tua ('Let thy will be done').

Fiat Homo is set in the 26th century some centuries after a cataclysmic nuclear war referred to as the 'Flame Deluge' subsequent to which humanity has reverted to a neo-medievalism.

Fiat Lux takes place some six centuries later in 3174 as the Earth emerges from the new Dark Ages into which it has descended and begins to experience 'a revival of learning in a dark world' (p. 174)


Fiat Voluntas Tua occurs a further six centuries in the future in 3781. Technologies have been rediscovered, and humanity teeters on the brink of self-extermination once again.

The novel is set largely within a monastic world of 'bookleggers' and memorizers, custodians of an intellectual history that the 'simpleton' survivors of the Flame Deluge sought to destroy having deemed knowledge to have been the cause of humanity's near-destruction:

'To escape the fury of the simpleton packs, such learned people as still survived fled to the sanctuary that offered itself. When Holy Church received them, she vested them in monks' robes and tried to hide them in such monasteries and convents as had survived.' (p. 73)

The titular character, a scientist before the cataclysmic events that reorient the narrative's history, seeks refuge with the Cistercians:

'Isaac Edward Leibowitz, after a fruitless search for his wife, had fled to the Cistercians[...] Father Isaac Edward Leibowitz had won permission from the Holy See to found a new community of religious[...] Its task, unannounced, and at first only vaguely defined, was to preserve human history for the great-great-great-grandchildren of the children of the simpletons who wanted it destroyed.' (p. 74)

A Canticle for Leibowitz is a brilliant but melancholy work, the relentlessly maudlin nature of which gives some insight into the depressive nature of its author, who took his own life in 1996. It is characterised by its protagonists' lengthy reflections on humanity's seeming inability to cast aside its own predilections towards self-harm, and its inability to break out of its orbiting of disaster and set a heading down a route of progressive, linear development.

'Can you believe that that brute is the lineal descendent of men who supposedly invented machines that flew, who traveled to the moon, harnessed the forces of Nature, built machines that could talk and seemed to think? Can you belive that there were such men?[...] I can't accept it. How can a great and wise civilization have destroyed itself so completely? (p.139).

Man as an 'imperfect incarnation, a dark reflection' (p. 155) of the design of the Creator that he was personally burdened with believing in echoes the title of Miller's famous 'Dark Reflection' short story and gestures towards the dejected world-view of A Canticle for Leibowitz, tempered by fleeting hope: 'Truth could be crucified; but soon, perhaps, a resurrection' (p. 156).

However, it is a burden that Miller, a convert to Catholicism after the Second World War, seems to have been both ill-equipped to bear and unwilling to reconcile himself with. For example, whilst it is ostensibly the character of Abbot Zerchi who enunciates the following passage in the novel, but they seem rather to be being mouthed by the conflicted author himself in the historical context of the late 1950s, with war behind it, war within it, and war ahead of it:

'The world's been in a habitual state of crisis for fifty years. Fifty? What am I saying? It's been in a habitual state of crisis since the beginning – but for half a century now, almost unbearable And why, for the love of God?What is the fundamental irritant, the essence of the tension? Political philosophies? Economics? Population pressure? Disparity of culture and creed? Ask a dozen experts, get a dozen answers. Now Lucifer again. Is the species congenitally insane, Brother? If we're born mad, where's the hope of Heaven? Through Faith alone? Or isn't there any? God forgive me, I don't mean that.' (p. 275)

'They had not yet seen the madness and the murder and the blotting out of reason. Then they did it, and then they saw it'. (p. 292)

Abandoning the earth in the novel's final sequence, the last monk to board to the spaceship bearing humanity away from the planet it has been such a poor steward of murmurs Sic transit mundus: 'thus passes the world' (p.338) in much the same way as Kurt Vonnegut shrugged 'so it goes' whenever his authorial eye happened to linger momentarily over the ineluctable stupidity of our species-being.

In A Canticle for Leibowitz, mankind's imbecility and incapacity to learn from the mistakes of its past as it wheels around to embrace future catastophes of its own making is personified in the figure of the omnipresent wanderer or pilgrim. A mythical figure of extraordinary age whose longevity is put down to his partaking of the milk of a mutant goat, the wanderer resembles both an Old Testament prophet, and the person of Leibowitz himself:

'And now this Francis, he meets a pilgrim – wearing what?- wearing for a kit the very burlap cloth they hooded Blessed Leibowitz with before they hanged him. And with what for a belt? A rope. What rope? Ahh, the very same -[...] By tonight, the whole novitiate is buzzing with the sweet little story that Francis met the Beatus himself out there, and that Beatus escorted our boy over to where that stuff was and told him he'd find his vocation' (pp. 52-53)

Published in the stand-alone 10 volume SF Masterworks hardback series, A Canticle for Leibowitz is a superb addition to the SF Masterworks list. It is a haunting, lyric, obsessive, and more than slightly depressing meditation - in many senses of the word - on the ways in which our lives are is lived 'in a dark sea of centuries wherein nothing seem[s] to flow' and within which 'a lifetime [is] only a brief eddy, even for the man who live[s] it.' (pp. 92-93).

'[Change] will come to pass by violence and upheaval, by flame and fury, for no changes comes calmly over the world. It will be so. We do not will it so.[...] Ignorance is king. Many would not profit by his abdication. Many enrich themselves by means of his dark monarchy. They are his Court, and in his name they defraud and govern, enrich themselves and perpetuate their power.[...] They will press the battle upon the world when their interests are threatened, and the violence which follows will last until the structure of society as it now exists is leveled to rubble, and a new society emerges. I am sorry. But that is how I see it.' (p. 228)

'We bury your dead and their reputations. We bury you. We are the centuries' (p. 259)