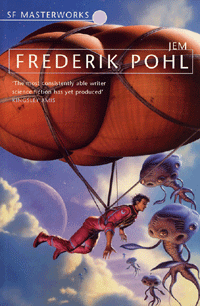 Frederik Pohl's Hugo and Nebula nominee Jem (1979) is a rich, complex and conflicted novel that considers what a future of planetary exploration may look like through the lens of the late Cold War politics of the eighth decade of the twentieth century.

The Earth Pohl envisages is organised around fuel ('Greasies'), food ('Fats') and people ('Peeps')-producing blocs rather than geographical land masses, which makes for some unusual alliances. A restructuring of social and economic arrangements has putatively been undertaken in order to preserve world peace:

No nation could afford to fight any other nation in the whole world anymore. Food, Fuel, and People each owned enough muscle to smash both the others flat, and all of them knew it. (Loc. 2651-52)


Logic, however, has little to do with the nature of human relations, and it is Pohl's jaded but historically contingent perspective on humanity's seemingly irredeemable, atavistic and insuperable desire to compete and fight in perpetuity that drives the novel's plot: 'Remember Clausewitz: war is the logical extension of politics.' (Loc. 779)

Kung's Semistellar Object was not much larger than a planet itself. As stars went it was tiny, barely big enough to fuse nuclei and radiate heat, but it had a planet of its own that sounded like fun. Hot. Humid. Dense air, but about the right partial pressure of oxygen to be congenial to life—including the life of a human exploratory party, if anybody cared to spend the money to try it out. (Loc. 886-87)

At least three species seemed to possess some sort of social organization: a kind of arthropod [the 'crablike Krinpit', Loc. 1567]; a tunneling species, warm-blooded and soft-skinned; and an avian species—no, not avian, she corrected herself. They spent most of their time in the air, but without having developed wings. They were balloonists, not birds. (Loc. 303-6)


Pohl goes to some lengths to fashion separate historical, cultural and sociological matrices of understanding for two of the Jem's three races, and these passages form some of the work's most arresting, compelling sections. However, it is mankind's persistence in preying on itself throughout the work that the reader may find most bewildering, if all too plausible:

And so, at the last, what can one say of them? What is to be said of Marjorie Menninger and Danny Dalehouse and Ana Dimitrova—and of Charlie and Ahmed Dulla, or of Sharn-igon and Mother dr'Shee? They did what they could. More often than not, they did what they thought they should. And what can be said of them is what can be said of all persons, human and otherwise, at the end: they died. Some survived the fighting. Some survived the flare. But in the long run there are no survivors. There are only replacements. And time passes, and generations come and go. (Loc. 4787-91)


The novel's cataclysmic conclusion is followed by an afterword considering the intriguing proposition that humanity will only thrive subsequent to its genetic makeup having been tempered by other influences. Left to its own devices, Pohl implies that the history of humanity will continue to repeat the cycles of tragedy and farce Marx identifies in the 'The Eighteenth Brumaire of Louis Bonaparte'.

Pohl imagines the implications of the final act that the Fats' commander Marge Menninger undertakes and the way in which the native species and the new arrivals intermingle in Jem's future, six generations hence:

Why fight Utopia? he thinks to himself. And so in that moment he completes the process of growing up. And begins the process of dying. Which is much the same thing. (Loc. 4915-16)

I'm a diehard Asimov fan; of his stories, I'd have to go with The Deep and The Dead Past.