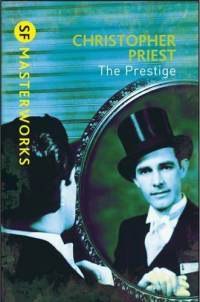 'Already, without once writing a falsehood, I have started the deception that is my life. The lie is contained in these words, even in the very first of them. It is the fabric of everything that follows, yet nowhere will it be apparent.' (loc. 537-39)

Christopher Priest's brilliant 1995 novel contains a vertigo-inducing number of duplicities, doubles, and doubts. A dense yet eminently readable piece of literary science fiction, The Prestige is a satisfying and compelling novel which is told twice through the mouths of its duelling (in every sense of the word) protagonists within a narrative frame that connects the past and present of the work deftly.

In a tour de force of literary legerdemain, plot elements are revealed gradually from different sources to much the same effect as the physical acts of prestidigitation described in the book that facilitate the delivery of 'the prestige, [...] the product of magic' (loc. 990):


First, he said, the magical effect would be increased if the illusion could be viewed from all angles. Secondly, if it could not, and a small segment of the audience had to glimpse the secret, it did not matter! If five hundred people are baffled, he said, it was of no importance that five others should see the secret. (loc. 842-45)

The Prestige is an exceptional and highly recommended entry in the SF Masterworks series.
Tweet