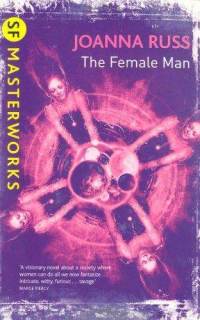 I approached Joanna Russ's The Female Man with some trepidation.

I had hoped that the reputation the work has earned as a cornerstone of feminist science fiction since its publication in 1975 (written 1970) would find expression in a subtlety of argument that transcended the bludgeon and bluster of the politics of gender of forty years ago.

Sadly, it does not.

Although incoherently presented, the four fictive worlds which overlap in The Female Man through the persons of Joanna, Jeannine, Janet and Jael invite productive reflection on the part of the reader with regard to their relation to the author, whom they may be interpreted as being facets of. Whilst such a reading effectively elevates Russ to the status of an Everywoman figure, which was doubtless not her intention, the trope allows for the consideration of possible futures and alternate histories of the female subject which are thoughtful and engaging.

However, it is easy for the reader to be sympathetic to the novel's concepts when considering them outside of the textual contexts within which they are presented. The Female Man wavers stylistically between the hectoring, the overwrought, the juvenile, and the unreadable. When the narrator observes 'This is the lecture. If you don't like it, you can skip to the next chapter' (loc. 466) I suspect that I could not have been the only reader to have concluded that not just the chapter in question but rather the entire novel reads like a testy diatribe against The Evil That Men Do and were left 'numb, numb with boredom' (loc. 2610-11) while struggling through it.

The Female Man is a curio you may wish to dip into for any number of reasons, but it really isn't something you need to take the time to read or study, and is a dubious addition to the SF Masterworks series.

Do not get glum when you are no longer understood, little book. Do not curse your fate. Do not reach up from readers' laps and punch the readers' noses. Rejoice, little book! For on that day, we will be free. (Lo. 3154-56)