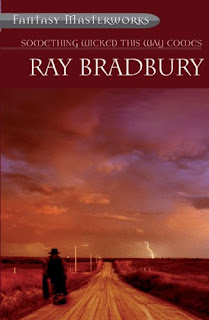 I picked this off the virtual shelf (although I also have the print copy) after the recent death of Ray Bradbury as a way of honouring the passing of an influential and much-loved author whose works I am not as conversant with as I would like to be.

Something Wicked This Way Comes describes the encounter of adolescents Will Halloway and Jim Nightshade with the mysterious Cooger & Dark's Pandemonium Shadow Show, an eerie circus sideshow that arrives in the middle of the night by railroad.

On discovering the dark purposes of the troupe's visitation, Halloway and Nightshade do what they can to stave off its threat to their own persons as well others prior to embroiling Halloway's father Charles in events.

Stylistically, I found the work uneven. Bradbury seems to lurch between the most chokingly florid prose and undeniably majestic passages that are startling and arresting in equal measure.

Structurally, the novel is disappointing. For me, the plot lacks interest and development and Bradbury relies on careering from set piece to set piece in order to retain such engagement as the work is able to muster. Personally, I found this tedious in the extreme.

Thematically, the struggle between an under-defined evil and a less-than-convincing goodness lacks interest, the depiction of adolescence is strained, and the delineation of the father-child relationship too oblique.

Consequently, more than once I felt I was left 'holding a book but reading the empty spaces' (loc. 487-77). However, Something Wicked This Way Comes does deliver some wonderful passages between the breathless and underwhelming plot devices, and is an acceptable late entry in the numbered run of the Fantasy Masterworks series.


For these beings, fall is the ever normal season, the only weather, there be no choice beyond. Where do they come from? The dust. Where do they go? The grave. Does blood stir their veins? No: the night wind. What ticks in their head? The worm. What speaks from their mouth? The toad. What sees from their eye? The snake. What hears with their ear? The abyss between the stars. They sift the human storm for souls, eat flesh of reason, fill tombs with sinners. They frenzy forth. In gusts they beetle-scurry, creep, thread, filter, motion, make all moons sullen, and surely cloud all clear-run waters. The spider-web hears them, trembles - breaks. Such are the autumn people. Beware of them. (loc. 2892-96)

Life in the end seemed a prank of such size you could only stand off at this end of the corridor to note its meaningless length and its quite unnecessary height, a mountain built to such ridiculous immensities you were dwarfed in its shadow and mocking of its pomp. (loc. 3436-38)