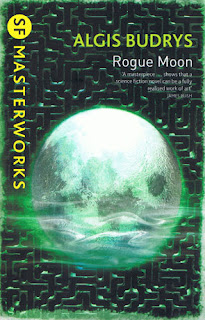 Rogue Moon relates the attempts of a team of scientists to tame an alien artifact discovered on the moon in order that its secrets may be studied: an 'obsidian hulk, toppling perpetually, perpetually re-erecting itself, shifting in place, looming over the bunker[...] reflecting the light of the stars, now dead black and lusterless.' (Loc. 2319-20).

However, the artifact proves itself adept at killing those who enter it, and a strategy is therefore developed whereby facsimiles of explorers are beamed to the moon (leaving their original selves alive on Earth) in order that they may progress incrementally through its maze-like interior before the duplicate is killed. The physiological strain and psychological impact of the transmission has the unfortunate effect of sending the subject insane, and the search is on for 'a different kind of man to send. A man who won't go insane when he feels himself die' (loc. 114):

The matter transmitter analyzes the structure of whatever is presented to its scanners. It converts that analysis into a signal, which describes the exact atomic structure of the scanned object. The signal is transmitted to a receiver. And, at the receiver, the signal is fed into a resolving stage. There the scanned atomic structure is duplicated from a local supply of atoms -- half a ton of rock will do, and to spare. In other words, what the matter transmitter will do is to tear you down and then send a message to a receiver telling it how to put you together again.

"The process is painless and, as far as your consciousness is concerned, instantaneous. It takes place at the speed of light, and neither the electrochemical impulses which transmit messages along your nerves and between your brain cells, nor the individual particles constituting your atoms, nor the atoms in their individual movements, travel at quite that rate.

"Before you could possibly be conscious of pain or dissolution, and before your atomic structure could have time to drift out of alignment, it will seem to you as if you've stood still and the universe has moved. You'll suddenly be in the receiver, as though something omnipotent had moved its hand, and the electrical impulse that was a thought racing between your brain cells will complete its journey so smoothly that you will have real difficulty, for a moment, in realizing that you have moved at all. (Loc. 859-69).

That section of the work that takes place on the moon is both linguistically and conceptually among the finest work in science fiction that you're likely to encounter. However, the novel's denoument constitutes a scant ten percent of its extent, and much of the rest is taken up with tedious sub-soap opera theatricals concerning the triangular relationship between Dr. Edward Hawks, the research scientist leading the project, the explorer Al Barker, and the vampish artist Claire.

A brief and largely unsatisfactory entry to the SF Masterworks series.


You have to decide how much of yourself can be changed before you consider yourself dead. (Loc. 978-79)