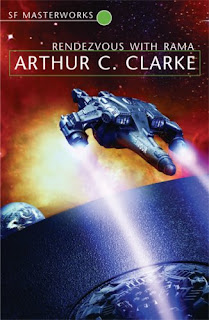 'On a billion television screens, there appeared a tiny, featureless cylinder, growing rapidly second by second. By the time it had doubled its size, no one could pretend any longer that Rama was a natural object. Its body was a cylinder so geometrically perfect that it might have been turned on a lathe - one with centres fifty kilometres apart. The two ends were quite flat, apart from some small structures at the centre of one face, and were twenty kilometres across; from a distance, when there was no sense of scale, Rama looked almost comically like an ordinary domestic boiler.' (Loc. 191-95)

One of the features of Clarke's fiction is his re-orientation of aspects of human arrangements that tradition has sanctified, and the interpolation of plausible extrapolations from current research. Rendezvous with Rama is no different, with its representation of polygamy (in all combinations; Loc. 586-88) and appealing, but effectively enslaved, superchimps or 'Simps':


Their rearing and education had probably cost as much as that of the average spaceman, and they were worth it. Each weighed less than thirty kilos and consumed only half the food and oxygen of a human being, but each could replace 2.75 men for housekeeping, elementary cooking, tool-carrying and dozens of other routine jobs (Loc. 776-78)

For all this, and as its title suggests, the main interest of the work resides in Clarke's description of the BDO itself. His description of the crew of the survey vessel Endeavour's exploration of Rama's interior is striking, and often suspenseful:


And now he understood the purpose of those mysterious trenches, the Straight Valley and its five companions; they were nothing less than gigantic strip-lights. Rama had six linear suns, symmetrically ranged around its interior. From each, a broad fan of light was aimed across the central axis, to shine upon the far side of the world. (Loc. 1279-81)

However, subsequent to the appearance of the organic automata that cleanse and maintain the BDO during its journey, the text loses much of its mystery, although it retains a good deal of interest:


'What we failed to take into account was the possibility of non-biological survival. If we accept Dr Perera's very plausible theory, which certainly fits all the facts, the creatures who have been observed inside Rama did not exist until a short time ago. Their patterns, or templates, were stored in some central information bank, and when the time was ripe they were manufactured from available raw materials - presumably the metallo-organic soup of the Cylindrical Sea. Such a feat is still somewhat beyond our own ability, but does not present any theoretical problems. We know that solid state circuits, unlike living matter, can store information without loss, for indefinite periods of time. 'So Rama is now in full operating condition, serving the purpose of its builders - whoever they may be.' (Loc. 2762-68)

Ultimately, readers may be disappointed to glean little from the work that can provide them with satisfactory answers to the two questions that exercise the minds of the crew of the Endeavour: 'Who were [the Ramans] -- and what went wrong?' (Loc. 501). This may be asking the wrong questions of Rendezvous with Rama, as one senses that Clarke's purpose was to invite the reader to capture and reflect on the sense of wonder developed within his description of the BDO's geography in this excellent addition to the SF Masterworks series, and take it with them beyond their reading of the novel, and into their own lives:


The nature and the purpose of the Ramans was still utterly unknown. They had used the solar system as a refuelling stop - as a booster station - call it what you will, and had then spurned it completely, on their way to more important business. They would probably never even know that the human race existed; such monumental indifference was worse than any deliberate insult. (Loc. 3294-96)