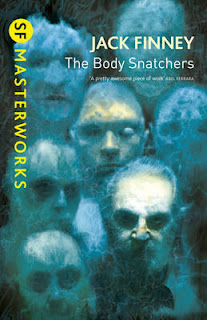 Parasitic alien seed pods capable of replicating organic life settle near the Californian town of Santa Mira and begin to create copies of its inhabitants. Dr. Miles Bennell becomes aware of the invasion through his patients' reports of changes in the behaviour of family members.

It is never adequately explained how the initial pods manage to position themselves next to their victims, nor what happens to those Santa Mirans who are reproduced, nor, if the pods need to be cultivated in the manner the final scene suggests, how the first generation harvested themselves, nor how the pods are able to propel themselves into and through space.

Looking beyond its shortcomings, the most productive reading of Finney's work may be as a study in the undermining of mid-fifties American values. A Cold War paranoia that speaks of a coming-to-awareness of the alienation that the seeds of consumerism have propagated in American society pervades the work. The havoc that the mindless compulsion of the parasitic invaders wreaks mirrors the power of self-interested economic individualism to erode and ultimately destroy a sense of communally forged, collectively expressed shared values, and intimates that the socio-economic enemy within is far more of a danger to the continuation of social arrangements than that which any external threat may pose.


I'd grown up here; from boyhood I'd known every street, house, and path, most of the back yards, and every hill, field, and road for miles around. And now I didn't know it any more. Unchanged to the eye, what I was seeing out there now -- in my eye, and beyond that in my mind -- was something alien.

The lighted circle of pavement below me, the familiar front porches, and the dark mass of houses and town beyond them -- were fearful. Now they were menacing, all these familiar things and faces; the town had changed or was changing into something very terrible, and was after me. It wanted me, too, and I knew it. (Loc. 1349-51; 1351-53)

Bennell and his handful of unadapted associates seem powerless to act against the alien agency, and incapable of formulating a plan to resist them:


We were[...] overwhelmed, not knowing what else to do, how to fight back, or against what. Something impossibly terrible, yet utterly real, was menacing us in a way beyond our comprehension or abilities; and we fled. (Loc. 1497-98)

"Miles, when did all this happen?" Becky gestured to indicate the length of the semi-deserted street behind and ahead of us. "A little at a time," I said, and shrugged. "We're just realizing it now; the town's dying." (Loc. 1677-80)

Unlike film adaptations of the work, Finney chose to give The Body Snatchers a redemptive, and deeply unconvincing, ending. However, the lasting impression that this uneven yet highly readable entry to the SF Masterworks series makes on this reader is that societies that are prepared to allow themselves to be dominated by forces intrinsically hostile to the collective good come to regard elements of their own genus as outsiders.


"You look shocked, actually sick, and yet what has the human race done except spread over this planet till it swarms the globe two billion strong? What have you done with this very continent but expand till you fill it?" (Loc. 2516-18)