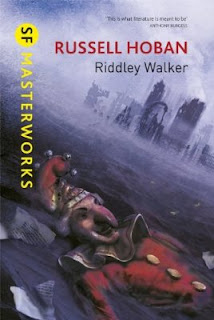 On one level, Russell Hoban's Riddley Walker is a straightfoward, linearly-plotted tale of a young adult's experiences in a post-apocalyptic British east coast landscape subsequent to the death of his father in a work-related accident.

However, such an unadorned description does little justice to the complex, richly allusive nature of this extraordinary, peregrinating, puzzling work.

Every 1 knows about Bad Time and what come after. Bad Time 1st and bad times after. Not many come thru it a live. (p. 2)

Thematic points of origin in the text between 'the 1 Big 1 or the Spirit of God of the Littl Shyning Man or what ever' (p. 150) are indistinguishable. History and language have become muddied and muddled in the work, which is presented in the first person in phonetically-inflected language by a titular narrator through whom meaning is iterated, but also impeded:


You know some times you get a fealing you dont want to put no words to. (p. 54)

The frequently encountered (and fully documented) 'Eusa Story' is simultaneously a retelling of the tale of St. Eustance, and a referent to the USA -- presumably one of the participants in the cataclysmic atomic event (the '1 Big 1') that led to the destruction of the previous civilization from which the world of Riddley Walker emerged -- as well as a computer 'user', as fragments of the language we encounter suggest.

The' Little Shyining Man the Addom' refers to both a Christ (and perhaps also Adamic) analogue, and the splitting of the atom. The Eusa Show, enacted with puppets modelled on traditional Punch & Judy entertainments, represents aspects of the puppet show from which it has been derived but also introduces novel elements which serve as a gloss, or perhaps a satire on, or possibly even a theatrical requiem to, the lost knowledge of the past:


Eusa says, 'I dont know what Ive los I aint very qwick.' The Littl Shyning Man says, 'Wel Eusa you bes qwicken up fas then becaws there gone Good Time and here comes Trubba.'
Eusa says, 'It looks like you see Trubba all ready you aint even in 1 peace.'
The Littl Man says, 'Eusa dont you know who done thise to me dont you onow who toar me in 2? Dont you know who opent me like a chicken time back way back in the wood in the hart of the stoan?'
Eusa says, 'How cud I know that?'
The Littl Man say, 'Becaws youre the 1 as done it.'
Eusa says, 'I dint know that Ive los it clean out of memberment.' (pp. 49-50).

The prehistory of Riddley Walker is a conundrum, despite the fictive future of the work being dated with some specificity:


There's a stoan in the Power Ring stannings has the number 1997 cut in to it nor we aint  never seen no year number farther on nor that. After Bad Time dint no 1 write down no year count for a long time we dont know how long til the Mincery begun agen. Since we startit counting its come to 2347 OC  which means Our Count.'
I said, 'Dyou mean to tel me them befor us by the time they done 1997 years they had boats in the air and all them things and here we are weve done 2347 years and mor and stil slogging in the mud?' (pp. 100, 124)

Relatively early in Riddley Walker, before aspects of the novel's back story are introduced towards the end of the work, the reader is invited either to conclude that magical realist elements feature in the novel's universe, or that genetic adaptation or mutation has taken place across not only humanity, but other species:


The dogs begun running round me all in a circel roun and roun with ther littl heads up hy and ther hy sholders up. They begun running on ther hynt legs. The sky wer black the stoans gon wite the dogs gone all diffrent shyining colours and the wite stoans shyning thru them. I tryd to hol it like that but I los it wernt man a nuff right then. (p. 157)

The 'fits' that Riddley has become a focus for this theme, leaving the reader to ponder whether the titular protagonist has epilepsy, or is perhaps manifesting some sort of evolutionary effect precipitated over thousands of years by his progenitors' exposure to radiation:


I had like a mynd flash of colourt lites with clicking and bleaping it wernt like nothing I ever acturely seen nor heard only in dreams. I cud like feal the woal circel of the dead towns in me and see a line of grean lite sweaping round that circel from the senter. (p. 89)

A sense emerges during the course of the work of the possibility of the existence of a genetic-level code trigger or gene mutation: I wer programmit diffrent then from how I ben when I come in to Cambry. Coming in to Cambry my hed ben ful or words and rimes and all kynds of jumbl of yellerboy stoan thots (p. 163)

Technologies have clearly informed the language and thinking of the society from which the communities of Riddley Walker have evolved:

This is an historic figure of speech suggesting 'we made ready and got underway' rather than suggesting that there are live terminals.


We pult datter and we printowt we wer roading Goodparleys show (p. 202)

Green Man myths and subsequent discoveries could be as prosaic as the discovery of the remains of a garden supply centre, but they also have a symbolic value as a signifier of rebirth and regrowth:


I had a idear of what it wer going to be when I unrapt it. I were right. It wer Greanvine. Carvit out of wood and paintit it wer may be 1/2 as big as a real face. The back of it flat and the front of it ful roundit it wer that same and very face I seen in my mynd. Them wide open grean eyes staring up at me wylst the vines and leaves growit out of his mouf (p. 165)


He wer pounding the yellerboy stoan to a fine powder. Then he done the same with some chard coal. Done it with a boal and pounder. He had the Saul & Peter all ready that wer kirstels like salt. He took little measurs and measuring out yellerboy and chard coal and Saul & Peter. Mixing them all to gether then and me watching. It wer like the 1st time I seen a woman open for mee and I wer thinking: This is what its all about then (p. 189)

Orfing reveals that the technology humanity was in possession of prior to the apocalyptic nuclear event is still extant as colonists had already passed beyond our galaxy. This passage also suggests that the trances Riddley has experienced and the 'telling' that takes place elsewhere in the work are genetic  echoes of post-Singularity bioengineering which connected humanity together; the receptors remain, but with the collapse of the technologies that enabled them, the facilitating data is no longer being generated:


To have them boats in the air which they callit them space craf and them picters on the wind which that wer viddyo and going out beyont the sarvering gallack seas. Not jus singing it you know. Acturely going it acturely roading out thru space. Jus try to get it in your mynd try to happen it in your head o dint they trants hy you cud feal the thrus and the boost of it you know the jynt woosh of them liffing  off and to the stations. Which they jumpt 1 station to the nex you see and til they jumpt right out beyont them gallack seas. I tel you Riddley lissening to then trantsing and telling it wer all mos like being in 1 of them space craf o the yoaring and the roaling o the nertial and the navigation of it' (p. 195)

After the explosion that kills Granser reintroduces gunpowder-making, civil discord is unleashed and the existing order is overthrown. Orfing says:


It looks to me like that Fools Circel is broakin now I dont think therewl be no mor regler hevvys and any Eusa folk whatre stil a live theyre all too binsy running a roan trying to go bang. Plus a woal lot of other peopl as wel by now parbly. Fars we know there bint no mor bangs yet but we dont have the leas idear whats going to happen. Right now there aint even no Pry Mincer its what they call a care maker Mincery with regenneril guvner me from the Ram at all the forms. (p. 198)

A thread of existentialist thought runs through Riddley Walker:


Our woal life is a idear we dint think of nor we don't know what it is. What a way to live. Thats why I finely come to writing all this down. Thinking on what the idear of us myt be. Thinking on that thing whats in us lorn and loan and oansome[...] The thot come to me: EUSAS HEAD IS DREAMING US' (pp. 7, 61)

He said, 'I never sung no beginning becaws you wont never fynd no beginning its long gone and far pas. What ever youre after youwl never fynd the beginning of it that why youwl all ways be too late. Onlyes thing youwl ever fynd is the end of things. What ever happens itwl be what you dint want to happen. What ever dont happen thatwl be the thing you wantit. Take your choosing how you like yuowl get what you dont want. (p. 150)

If I wer a figger in a show what hand wer moving me then? I cudnt be bothert to think on that right then. Theres all ways some thingwl be moving you if it aint 1 thing its a nother you cant help that (p. 170)

A transcendent and richly rewarding entry in the SF Masterworks series, Riddley Walker is an essential read.