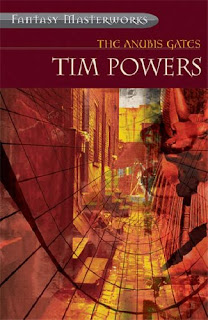 "One of these time gaps is just outside Kensington, five miles from the Strand, on the evening of the first of September, 1810. And unlike most gaps that close to the 1802 source, this one is four hours long."

Time travel, demonic magicians, werewolves, cross-dressing heroines, Romantic poets and Egyptian gods: The Anubis Gates is a sovereign salmagundi of some of the pillars of speculative fiction.

Laphroaig-swilling, cigar-toting literary professor for hire Brendan Doyle is commissioned by plutocrat J. Cochran Darrow to travel back to 1810 through a time gate in order to verify the identity of stoner sonneteer Samuel Taylor Coleridge.

Suffice to say, things don't go according to plan.

The principal enjoyment of The Anubis Gates lies in allowing oneself to be dazzled by the pyrotechnics of the tale itself, and as such there is little purpose in rehearsing the panoply of plot twists the work provides. It is a novel of incident rather than ideas which places a premium on the pleasures of thematic divagation rather than focused rumination and as such is a far from taxing, albeit thoroughly enjoyable, read.

Winner of the 1983 Philip K. Dick Award, The Anubis Gates is an entertaining, undemanding, and fully immersive entry into the Fantasy Masterworks series.
Tweet