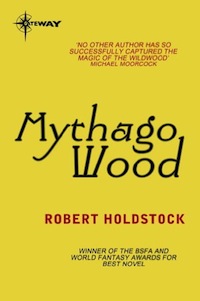 'Was it possible that the stories could survive that long? Tales of the glaciers, and the new forests, and the advance of human societies northwards across the marshes and the frozen hills?' (Loc. 3581-83)

Winner of the BSFA Award for Best Novel in 1984 and World Fantasy Award for Best Novel in 1985, Robert Holdstock's Mythago Wood is the first entry in a sequence of works set in an ancient woodland that brings the myths and legends of Anglo-Saxon, Celtic and Norse origin to life, as well as revisiting vignettes of medieval, seventeenth century, and even early twentieth century folk histories.

Returning to Oak Lodge, the family home on the edge of Ryhope Wood, after recuperating in southern France from wounds received towards the end of the Second World War, Stephen Huxley discovers his brother Christopher has become obsessed with breaching into the heart of the ancient forest, a mania that similarly consumed their late father during their childhood.


When Christopher fails to return from one of his lengthy excursions, Stephen sets out to discover more about the woodland realm for himself. An encounter with Guiwenneth, a mythago whom his father also had a fixation with, initiates a sequence of events that sees Christopher setting off into the forest himself in the company of Harry Keeton, a former RAF airman whose facial disfigurement was inflicted by things mystical rather than martial.

The Huxleys speculate that the mythagos are brought into being as a consequence of Ryhope Wood being within a 'ley matrix' (Loc. 555-56) that provides a 'creative field that can interact with the unconscious'. It is within the unconscious, the Huxleys propose, that mankind carries 'pre-mythagos', images 'of the idealized form of myth creature[s],' remaining 'in our collective unconscious', and 'transmitted through the generations.’ (Loc. 581-90)

The Huxleys own familial relations are interpolated within rather standing outside of the mythagos both pursue, and come to embody. Christopher records how 'the Urscumug opened its mouth to roar, and my father seemed to leer at me' ; The last I saw of my father’s mythago was its towering black form, swaying slightly as it stared into the distance, its nostrils quivering, its breathing a quiet, calm, contemplative sound. Loc. 836-7, 3775-78). It is with more of a sense of acceptance than despair that Christopher acknowledges his own transition into the mythago realm: 'I had become a part of legend myself. Christian and his brother, the Outlander and his Kin, working through roles laid down by myth, perhaps from the beginnings of time' (Loc. 3831-33).

In Mythago Wood, Robert Holdstock crafts an hypnotically plausible liminal reality that conjoins the richness of Northern myth and folklore with the tangible sense of historic events that the age and silence of ancient woodlands are still capable of evoking in those that walk them. An excellent entry in the SF Gateway library, and one that is bound to whet the reader's appetite to journey on to Lavondyss.
Tweet