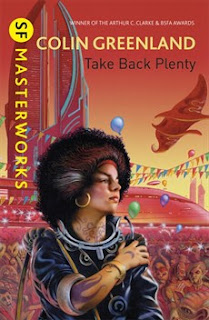 'I would not shake my credit in telling an improbable truth, however indisputable in itself' (Lawrence Sterne, The Life & Opinions of Tristram Shandy (1759-67); Vol. 1, Chapter XI (Harmondsworth: Penguin, 1967), p. 53

'Here [Tabitha Jute] was now, years later, in Schiaparelli, heading for a fateful encounter which would completely and utterly change her life, my life, all our lives' (p. 10)

Colin Greenland's British SF Association and Arthur C. Clarke Award-winning Take Back Plenty reminded me of Lawrence Sterne's extraordinary magnum opus in a number of ways. The principal similarity resides in the fact that for a considerable stretch of this 482 page novel, nothing really happens.

Tabitha Jute, captain for the Kobold class freighter Alice Liddell, encounters renegade performance troupe-cum-criminal gang Contraband, and accepts a commission to take them to Plenty, and beyond. They're captured, there's a disaster, salvation of a sort for some, and that's about it, really.


Driven from her normal reserve, [Tabitha] talked more to the ship on this trip than she ever had, and not on technical or navigational questions. On this journey through the realm of virtual, her chosen companion was an imaginary one. When people, natural, human, or otherwise, become too much to bear, your best friend may be an artifact (pp. 231-2)

For me, much of the interest in Take Back Plenty lay in the chapters that punctuate the main narrative wherein Tabitha relates anecdotes from her past life to Alice. Providing a flighty contrapuntal theme to the sustained chord of the main work, the interplay between the captain and the ship's artifact proved to be more compelling to me than the narrative itself in a work which is 'digressive[...] and[...] progressive too, at the same time' (Tristram Shandy, op. cit., p. 95).


How gratifying it would be to record that before the Ugly Truth skipped back into normal space our resourceful heroines once again turned the tables on their tormentors, and effected a second cunning escape. Alas, it did not happen; and even I, with all my narrative liberty in time and space, my freedom to conjecture what shadows flit through the inviolable regions of the living mind -- even I am bound by truth. Were I to trifle with the truth in the slightest respect, albeit for our mutual pleasure at watching valour confound villainy, could I then win your trust for any other feature of this astonishing tale? (p. 418)

The conclusion of Take Back Plenty confounds the expectations such passages provoke that the novel is narrated by an omniscient authorial voice. The familiarity this device, beloved of eighteenth century novelists and those who subsequently emulated them, confers is exploded at the end of the work when the identity of the narrator is revealed in a most pleasing manner.

Take Back Plenty is an enjoyable addition to the SF Masterworks library, and is a work to be enjoyed in the page-turning tradition of the Space Opera genre it emulates (and indeed contributes to) rather than meditated over.
Tweet