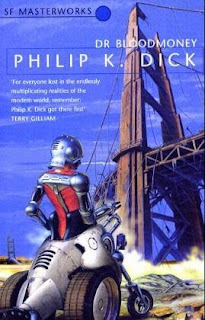 Philip K. Dick's Dr. Bloodmoney revisits the author's habitual thematic obsessions of justifiable paranoia and the transmogrification of the illogical into the plausible and externalises, rather than internalises, them.

Written in 1963, but not published until 1965, Dr. Bloodmoney's narrative encapsulates what Frederic Jameson describes as the 'pastiche and schizophrenia' of the cultural forms of late capitalism.  The influence of the closing of Berlin's borders and the construction of the Berlin Wall in 1961, the Cuban Missile Crisis of 1962, the ratification of the nuclear test ban treaty in 1963, and -- entirely appropriately, this being Philip K. Dick -- the 1964 film Dr. Strangelove (which the novel predates in everything other than title) are all contextual influences upon the work, and are echoed within it.

In the novel's historic present of the 1980s, civilisation struggles to reassert itself after having nearly been eradicated as the consequence of a defence-related nuclear accident in 1972 which has led to the destruction of the world's pre-existing infrastructural, political and economic organisation. The titular architect of the disaster, Dr. Bruno Bluthgeld ('blood money') lives on in the work, serving as a sort of totem for the failures of character that allowed the world to produce a means of 'defending' itself that if used would also destroy it.

The fact that humanity now seems set on working towards the reproduction of the forms that led to the moment of catastrophe make the recuperation of a positive reading of this bleakly pessimistic work difficult to construct, as characters yearn to devolve responsibility for their actions and dream of problems being 'automated out of existence' (loc. 3446-48):


Our little fragile world, Bonny thought, that we labored to build up, after the Emergency. This puny society with out tattered school books, our 'deluxe' cigarettes, our wood-burning trucks—it can't stand much punishment; it can't stand this that Bruno is doing or appears to be doing. One blow again directed at us and we will be gone; the brilliant animals will perish, all the new, odd species will disappear as suddenly as they arrived. Too bad, she thought with grief. It's unfair; Terry, the verbose dog—him, too. Maybe we were too ambitious; maybe we shouldn't have dared to try to rebuild and go on.    "I think we did pretty well, she thought, all in all. We've been alive; we've made love and drunk Gill's Five Star, taught our kids in a peculiar-windowed school building, put out News & Views, cranked up a car radio and listened daily to W. Somerset Maugham. What more could be asked of us? Christ, she thought. It isn't fair, this thing now. It isn't right at all. We have our horses to protect, our crops, our lives. . . . (loc. 3232-33)

If Dr. Bloodmoney is pregnant with anything, it is not the fecundity of parturition but rather the despair of not being able to give birth to the new. The foetal Bill is trapped within the body of his internally conjoined twin, Edie; Walt Dangerfield is trapped in orbit around the Earth, neither able to achieve escape velocity, nor return; psychokinetic phocomelus Hoppy Harrington strives to escape a body that holds more potential than any he could adopt.

Philip K. Dick's body of work is one of the cornerstones of the science fiction oeuvre, yet in a sense stands outside it. Dr. Bloodmoney is an archetypal Dick novel; conceptually perplexing, thematically dense, and richly rewarding to read and revisit, it is another excellent entry in the SF Masterworks series.