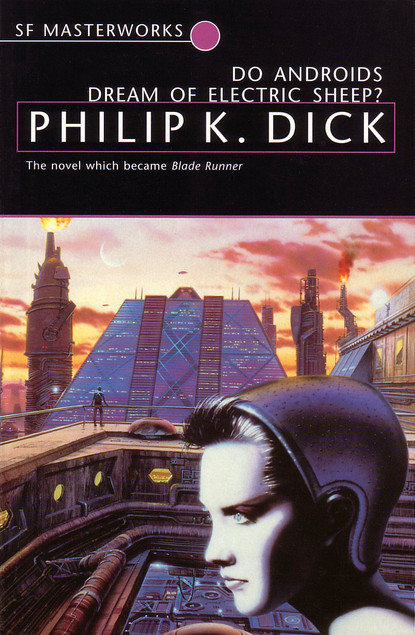 “I notice you’ve never had any hesitation as to spending the bounty money I bring home on whatever momentarily attracts your attention.” He rose, strode to the console of his mood organ. “Instead of saving,” he said, “so we could buy a real sheep, to replace that fake electric one upstairs. (Loc. 125-27)

However, to my mind Dick's novel is rather less of a metaphysical mystery of machine consciousness than it is an obsessive-compulsive meditation on the many ways the author's characters conspire to alienate themselves.

Certainly, there is a sense in which the novel invites the reader to see humanity in androids and humanity as automata ("Most androids I’ve known have more vitality and desire to live than my wife", loc. 1251-52) and Dick goes to some lengths to explain the evolution of the various tests that have been developed in order to distinguish automaton from human.

The key point here is the indeterminacy that the act of attempted discrimination provokes and the Voigt-Kampff scale's unreliability in identifying differences between the two subjects, as well as the fact that the means of gradating the likelihood of android identity is perpetually being redefined, the Voigt-Kampff scale being merely the most recent iteration:

A small class of human beings could not pass the Voigt-Kampff scale. If you tested them in line with police work, you’d assess them as humanoid robots. You’d be wrong, but by then they’d be dead (loc. 545-46)

Beyond this, however, Dick's characters seem to do a good enough job of keeping themselves at arm's length from their own phenomenological experience. Deckard even comes to envy and fantasise about androids:

He wondered, now, about her, too. Some female androids seemed to him pretty; he had found himself physically attracted by several, and it was an odd sensation, knowing intellectually that they were machines, but emotionally reacting anyhow. (Loc. 1257-59)

The quote with which this review begins illustrates the densely layered emotional estrangement the novel's protagonist, Rick Deckard, has swaddled himself in: the association of the acquisition of money with the potential to acquire the living commodities (the prices of which he compulsively reviews) which, it is inferred, would in some way improve the quality of the lives of himself and his wife; the willing enslavement on a societal level to the influence of the mood organ; the totemic worship of animals in a post-apocalyptic environment that has destroyed many species to the point that the possession of fake animals is considered to be a social pre-requisite, and so on:

Owning and maintaining a fraud had a way of gradually demoralizing one. And yet from a social standpoint it had to be done, given the absence of the real article. He had therefore no choice except to continue. (Loc. 238-41)

The tyranny of the object over the subject, one of the mainstays of postmodernist thought, finds a precursor in one of Deckard's author-reported observations:

He thought, too, about his need for a real animal; within him an actual hatred once more manifested itself toward his electric sheep, which he had to tend, had to care about, as if it lived. The tyranny of an object, he thought. It doesn’t know I exist. (Loc. 600-02).

Dick seems both terrified of and fascinated by the commodity-informed nature of urban life, to which he speculatively assigns a self-replicating nature -- when no-one is around to see it happening:

By coming here he had brought the void to them, had ushered in emptiness and the hush of economic death. (Loc. 635-36)

Kipple is useless objects, like junk mail or match folders after you use the last match or gum wrappers or yesterday’s homeopape. When nobody’s around, kipple reproduces itself. For instance, if you go to bed leaving any kipple around your apartment, when you wake up the next morning there’s twice as much of it. It always gets more and more[…] No one can win against kipple,” he said, “except temporarily and maybe in one spot, like in my apartment I’ve sort of created a stasis between the pressure of kipple and nonkipple, for the time being. But eventually I’ll die or go away, and then the kipple will again take over. It’s a universal principle operating throughout the universe; the entire universe is moving toward a final state of total, absolute kippleization. (Loc. 881-83, 892-95).

The dominant religion of the novel's world, Mercerism, sees practitioners linking mentally with other devotees via Empathy Boxes to share the experience of Wilbur Mercer. Dick playfully describes Deckard's assessment of the androids' own aspirations towards a collective spiritual experience which, in the author's typical idiom, reveal a kaleidoscopic number of possible readings as to its symbolic connotations, inside and outside the text:

Roy Baty (the poop sheet informed him) has an aggressive, assertive air of ersatz authority. Given to mystical preoccupations, this android proposed the group escape attempt, underwriting it ideologically with a pretentious fiction as to the sacredness of so-called android “life.” In addition, this android stole, and experimented with, various mind-fusing drugs, claiming when caught that it hoped to promote in androids a group experience similar to that of Mercerism, which it pointed out remains unavailable to androids. (Loc. 2368-72)

In our own pre-technological singularity era, Do Androids Dream Of Electric Sheep? can be a tough read; not because it is particularly challenging, structurally, but because of the conclusions it invites. For analogue-educated digital converts of a certain age such as myself, the novel's vision of an entropic future seems much closer now than when one of science fiction's greatest visionaries brooded over the implications more than forty years ago:

Yet, the dark fire waned; the life force oozed out of her, as he had so often witnessed before with other androids. The classic resignation. Mechanical, intellectual acceptance of that which a genuine organism—with two billion years of the pressure to live and evolve hagriding it—could never have reconciled itself to. “I can’t stand the way you androids give up,” he said savagely. (Loc. 2567-70)

Time and tide, he thought. The cycle of life. Ending in this, the last twilight. Before the silence of death. He perceived in this a micro-universe, complete. (Loc. 2377-78)