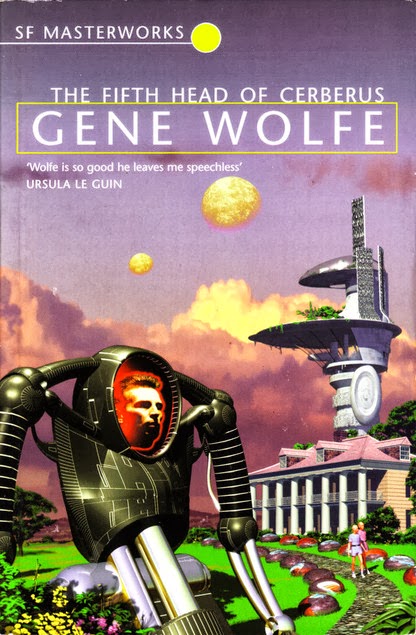 Gene Wolfe's 1972 sequence of three linked novellas ('The Fifth Head of Cerberus', '"A Story," by John V. Marsch', and 'V.R.T.') is simultaneously a murder/mystery story, post-colonial allegory, and a cautionary tale concerning cloning and the impact such technologies could have on a theoretical human intergalactic diaspora.

The first and third tales are presented sequentially, although not in temporal succession, and both feature the character Dr. John V. Marsch, an anthropologist supposedly from Earth. The title of the intervening tale suggests that its author is also Dr. Marsch, but its subject matter (the tribulations of a group of aboriginals from the plant Sainte Anne, twin planet to Sainte Croix) offers an adjacent look at the work's thematic interests.

At the core of the mysterious mediations that occur between characters (who may be clones), versions of characters (who may be aboriginals), and their clones (recessing, near-infinitely), lies the hypothesis that Marsch is interrogating, posited by Dr. Aubrey Veil who is, as the reader discovers, a suitably shady individual herself:


“Veil’s Hypothesis supposes the abos to have possessed the ability to mimic mankind perfectly. Veil thought that when the ships came from Earth the abos killed everyone and took their places and the ships, so they’re not dead at all, we are.” (Loc. 385-87)

She believed, though she pretended not to, that the Annese have devoured and replaced homo sapiens—Veil’s Hypothesis, and she is Veil; it has been used for years to discredit other heterodox theories about the original population of Sainte Anne. But who, then, Tante Jeannine, are the Free People? Conservatives who would not desert the old ways? The question is not, as I once thought, how much the thoughts of the Shadow children influence reality; but how much our own do. (Loc. 3282-85)

Despite its relative brevity, the text possesses an exceptional semantic density which invites, but also purposefully challenges, interpretation through its panoply of narrators, indeterminate chronology, and textual filters. 'V.R.T.,' for example, is presented as a series of textual fragments, diary entries, and interrogation reports. 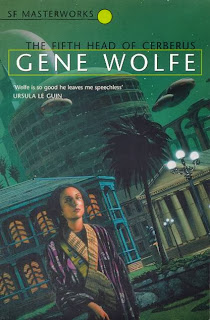 Collectively, these devices can enrich the text's enjoyment for those who take pleasure from such equivocal and enigmatic writing, but equally it could frustrate readers who seek a simple tale, well told. The observation 'Let me see if I can cure my habit of skipping back and forth and give everything of interest in the order in which it occurred' (Loc. 2237-38) broadly describes how Wolfe stands in relation to his text.

To be fair, Wolfe (who's narrative voice is a (G)ene-splice away from that of the narrator 'Number Five') does offer the reader fair warning that The Fifth Head Of Cerberus is going to offer more in the way of spirals of indeterminacy than it will provide in deductively-reasoned facts:


You wish to find what is true, and I’m afraid you’re going to find damned little; I want what is false, and I’ve found plenty. (Loc. 2083)

Among his many other authorial accomplishments, Wolfe is technically commanding, a builder of compelling worlds, and a master-craftsman of plotting. For this reader, The Fifth Head Of Cerberus stands as a high-water mark of speculative fiction, and is a obvious and worthy candidate for inclusion in the SF Masterworks list.

Note: the second, alternate cover to the numbered (I think) sequence of SF Masterworks only came to my attention when seeking images for this post. I do not own a copy of the alternate cover version, but if anyone who does has any more details that I can add in this regard, please feel free to forward them on, and I will amend this entry accordingly with a credit.